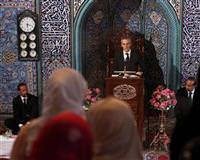 As central Oslo reeled from Norway's worst massacre in modern history, a blond man in the grieving crowd asked Iraqi-born Iman al-Kofi, wearing a headscarf, for a hug.

Kofi, who had a friend in intensive care with three bullet wounds and had learned that at least one other friend of Iraqi origin had been killed in Friday's massacre by an anti-Islamic extremist, obliged, and the man walked back into the crowd without another word.

Kofi, 19, and other Muslim immigrants say they would have been treated very differently had the perpetrator of one of the country's most heinous crimes been a fellow Muslim, and not far-right Norwegian zealot Anders Behring Breivik.

"If it was a Muslim, they would blame all foreigners and hate us all," she said, adding that she had come to Oslo to grieve with the tens of thousands of others who converged on the Norwegian capital on Monday to pay their respects to the dead.

in Norway said they shared the pain of their Christian compatriots after the massacre, in which Breivik gunned down young people, mainly teenagers, on a holiday island and bombed an Oslo government building, killing a total of 76 people.

Norwegians of all backgrounds united to condemn his actions and views, and Muslim leaders said they hoped the atrocities would lead to a better future for race relations.

Muslims said they felt relief that the rising tide of anti-immigrant and anti-Muslim sentiment in Europe had not been given fresh momentum by another Muslim killing innocent people in the name of Islam.

"We thought 'Praise God it wasn't a Muslim'," said Algerian immigrant Mahmoud Tariq, 23, who was at an Oslo mosque when its windows were blown open by the bomb Breivik had planted.

"Of course we were scared. We thought they'd clamp down on us," said Tariq's friend Mohammed Khaled, 31.

"I have a big hope that this will change Norway in a positive direction. Everyone is united, regardless of color, cultural background, ethnicity. We are all affected, we are all wounded," said Najeeb Ur Rehman Naz, a prominent Imam based in Norway.

Foreign Minister Jonas Gahr Store is due to attend a mosque ceremony for Breivik's victims.

For some, relief was tinged with fear because an outwardly normal Norwegian harbored such murderous anti-Islamic views.

Although most stressed they had been made to feel welcome by the vast majority of Norwegians, a few said they saw shades of Breivik's anti-immigrant sentiment in wider society.

Norway's opposition Progress Party has grown in power in recent years, partly through its tough stance on immigration.

"It was a relief to find out he wasn't a Muslim, but at the same time he had a message, it was against Muslims and it was not good," said Zohra Abdullah, 28, horrified that the extremist violence she had fled in Afghanistan had followed her to Norway.

Rightist parties in neighboring countries, such as the anti-immigration Sweden Democrats party, now in parliament for the first time, have heightened their rhetoric against Muslims, painting Islam as backward and incompatible with Western or Scandinavian values.

Tension in the region has bubbled in recent years over issues such as cartoons of Islam's Prophet Mohammad published by a Danish newspaper and reprinted by others, and over attacks by Muslim extremists. Many Muslims regard pictures of the Prophet as deeply offensive.

"You could have seen it coming. Some people say it was just a matter of time, but I was shocked by the degree to which it happened," said a Muslim member of Norway's police force who declined to be named.

Like some 200,000 other Norwegians in central Oslo on Monday, he carried a rose in remembrance of the dead.

Rim Chawwa, a Palestinian refugee facility director, said that while she had come across Norwegians with far-right views, such incidences were rare and Norwegians should not all be judged by the actions and views of a few extremists.

"Some people have a view that Muslims are extremists and violent. It turns out that terrorism doesn't have a nationality or a religion -- they're people who are sick inside," she said.

"It shows that if an Arab or Muslim does this, it doesn't mean all of us have these views," she added.

Norway's Muslim leaders were hopeful for the future, seeing Breivik's violent call for Europe to shun Muslims as actually more likely to bring Muslims and Christians together.

"I think minorities will think of themselves as more Norwegian ... religion, ethnicity, color will go into the background. The Norwegian identity will be strengthened," said Mehtab Afsar, Islamic Council of Norway general-secretary.

"We are standing shoulder to shoulder with our Christian brothers and sisters in Norway," he added.

Breivik's mass shooting on the holiday island of Utoeya targeted youth members of Norway's Labour Party, which heads a relatively pro-immigrant, pro-multicultural government in coalition with the Socialist Left Party and the Center Party.

Breivik's actions could help the current government, and in particular the Labour Party, analysts said.

"In the short term, the parties are not going to touch the immigration issue ... I think it's going to make politicians quite cautious in their wording, their rhetoric," said Hanne Marthe Narud, political science professor at Oslo University.

"In a time of tragedy, voters normally flock around the established parties, particularly those in office. The Labour Party has been particularly harmed by this, and the way the prime minister has acted is extremely good. His popularity will spill over to the Labour Party," she added.

Economically, affluent Norway displays little of the strain that elsewhere has gone hand in hand with resentment of immigrants, either for allegedly taking away jobs or being too much of a burden on the welfare system.

Statistics cited by the Directorate of Integration and Diversity show that not only does Norway have one of the West's highest levels of native-born employment, but also that the number of foreign-born inhabitants with jobs is higher, relatively, than in Britain, Germany and the United States.

In central Oslo, many immigrants have opened stores and restaurants. On the wall of an Afghan-run shop selling imported goods, a sign reads "Welcome Norway."

"I hope it stays this way."