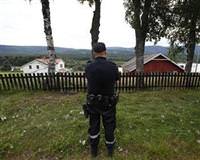 "Explosives were found at the farm," police prosecutor Trine Dyngeland told Reuters. "The police carried out a controlled detonation of the explosives."

She said no one was hurt in the controlled blast, at Rena, about 160 kms (100 miles) north of Oslo. She declined to estimate what quantities were found.

Police believe that Breivik made his bomb using fertilizer as a main ingredient. He bought fertilizer under the cover that he was a farmer.