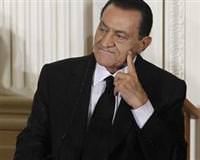 Egypt's Hosni Mubarak flew to Cairo on Wednesday where he will be tried for conspiring to kill protesters, the first Arab ruler to appear in court since uprisings swept the region.

Speculation swirled in the hours before the trial about whether the 83-year-old, hospitalised in Sharm el-Sheikh on the Red Sea since April, would turn up in a court set up in the Police Academy in Cairo and with a cage for defendants.

Mubarak left hospital in the Red Sea resort in an ambulance with a motorcade and flew to a Cairo military base from where he was taken by helicopter to the court. State television showed images of his ambulance drawing up at the court building but crowds of security and others blocked images of him exiting.

Mubarak's trial is unprecedented. He was driven from office by his people and they are holding him to account in a way that will send a stark message to other Arab rulers facing unrest.

Tunisian President Zine al-Abidine Ben Ali, the first Arab leader to be ousted in the Arab Spring, was tried and sentenced to jail in absentia. He fled to Saudi Arabia. Iraq's Saddam Hussein was ousted by U.S.-led forces and then tried.

Wednesday's court session may be over quickly, as in some trials, with charges read and pleas recorded. Legal experts say comments by presiding judge Ahmed Refaat before the trial suggested there might be daily sessions after this to ensure a swift verdict.

Police patrolled the street near Mubarak's hospital and barred the way to a small group of protesters outside, chanting: "The people want the execution of the killer."

Outside the court site on the outskirts of Cairo, a screen was erected to show the trial. Pro- and anti-Mubarak protesters faced off. Some in the two groups hurled stones at each other. Hundreds of police outside intervened to calm them down.

A small pro-Mubarak rally of men, women and children chanted: "Oh Mubarak hold your head high" and "We will demolish the prison and burn it down, if Hosni Mubarak is sentenced." Nearby another group against Mubarak chanted: "Raise your voice, Freedom will not die."

Mubarak will stand trial with his two sons Gamal, a banker-turned-politician once seen as being groomed for top office, and Alaa, who had business interests, as well as former Interior Minister Habib al-Adli and six senior officers.

A business executive and Mubarak confidant, Hussein Salem, is being tried in absentia.

Al Jazeera television reported that Mubarak's sons and Adli had arrived at the court ahead of the trial.

Charges range from conspiring in the killing of protesters to abusing power to amass wealth.

Security was tightened in Cairo's Tahrir Square. Police and military officers in riot gear were deployed there, with dozens of police trucks and a few army armoured personnel vehicles.

Protesters had camped out in Tahrir for three weeks in July seeking a swifter trial for Mubarak and other reforms. They feared the ruling generals would use Mubarak's illness as a ploy to avoid publicly humiliating the war veteran and ex-president who ran Egypt for 30 years until February 11.

If convicted, Mubarak could face the death penalty. In his only public comments since quitting, he vowed in April to clear his name and that of his family of accusations of corruption.

"If you feel sympathy for any dictator broken and standing in a cage, remember him when he was unjust on the throne," Marian wrote on Twitter, using the website that became a tool in rallying the masses during the 18-day uprising against him.

The big metal cage stands in a hall that can seat hundreds of people in the Police Academy, the same location where two days before protests erupted on January 25 Mubarak had praised the work of the police in keeping Egypt secure.

Police used live ammunition, rubber bullets and teargas on protesters in Cairo and other cities. In Suez, an effigy of Mubarak hangs from a lamppost near the police station that was gutted by fire during street battles that raged there.

Egyptians blame Mubarak for economic policies they say filled the pockets of the rich while many of the nation's 80 million people scrabbled in squalor to feed their families. They are also angry at his repression of any opposition.

Yet some are reluctant to see a man who was a bomber pilot and then leader of the air force in the 1973 war with Israel put in the dock. Others are simply tired of the disruption protests have cause and want to return to their daily lives.

Activist and director Mohamed Diab wrote on Twitter that the trial was "likely to cause a big rift, just like after his second speech. Imagine Mubarak with white hair, weeping and collapsing in court."

Mubarak, who dyed his hair as he aged in office, had won over some Egyptians with his final speeches that focussed on what he described as a lifetime of service. Others were angered by what they saw as his paternalistic and patronising style.

When the army finally stepped in to take control and he was flown off to internal exile in Sharm el-Sheikh, the streets of the capital and other cities erupted into cheers.