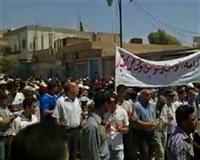 Saudi Arabia's King Abdullah demanded an end to the bloodshed in Syria on Monday and recalled his country's ambassador from Damascus, in a rare case of one of the Arab world's most powerful leaders intervening against another.

It was the sharpest criticism the oil giant -- an absolute monarchy that bans political opposition -- has directed against any Arab state since a wave of protests roiled the Middle East and toppled autocrats in Tunisia and Egypt.

The Saudi statement came with all the weight of the king's personal authority, and follows similar statements since Saturday from the Arab League and the Gulf Cooperation Council (GCC).

"What is happening in Syria is not acceptable for Saudi Arabia," he said in a written statement read out on Al Arabiya satellite television.

Events in Syria had "nothing to do with religion, or values, or ethics," the king said.

In Washington, a U.S. State Department official said the king's statement was a strong signal to Syria's President Bashar al-Assad.

"This is another clear sign that the international community, including Syria's neighbors, are repulsed by the brutal actions of the Syrian government and will continue to stand with the people of Syria," the official said.

A former U.S. government official with knowledge of the region said the Saudi king likely went public to press concerns that had been conveyed privately.

"I think he did it on his own because the private messages were clearly being ignored," the former official said, speaking on condition of anonymity.

A crackdown by Assad against protests has become one of the most violent episodes in the wave of unrest sweeping through the Arab world this year.

On Sunday, activists said Syrian troops with tanks had launched an assault on the city of Deir al-Zor in the east of the country, killing dozens. The past week has seen scores of people killed in a siege of Hama, a city where Assad's father launched a crackdown nearly 30 years ago, killing thousands.

Assad's government says it is fighting against criminals and armed extremists who have provoked violence by attacking its troops. Activists and Western countries say Assad's forces have attacked peaceful protesters.

"Syria should think wisely before it's too late and issue and enact reforms that are not merely promises but actual reforms," the Saudi king said.

"Either it chooses wisdom on its own or it will be pulled down into the depths of turmoil and loss."

Earlier on Sunday, the Arab League, in a rare response to the escalating bloodshed in Syria, called on authorities there to stop acts of violence against civilians.

Although several Arab states have joined the West in opposing Libya's Muammar Gaddafi, most of the region's rulers have been cautious about criticizing other Arab leaders during the wave of protests this year.

The other regional heavyweight, Turkey, whose foreign minister is due in Damascus on Tuesday, has been voicing its disapproval for months.

Clinton discussed the U.S. position that Syria must immediately return its military to barracks and release all prisoners of concern and asked Davutoglu to "reinforce these messages" with the Syrian government, State Department spokesman Mark Toner said.

Saudi Arabia had maintained its silence regarding Syria despite deep antagonism over the contest for regional hegemony with Shi'ite Iran, one of Syria's only allies and chief patron of Hezbollah, the Shi'ite militia and political movement to which Saudi Arabia's allies have lost influence in Lebanon.

Saudi columnist Hussein Shobokshi said the king's address placed the responsibility for the bloodshed squarely on Syria's ruling circle, and that recalling the Saudi ambassador could pave the way for other states to wash their hands of Assad.

"This will open up the gate for other countries to follow suit, Islamic and Arab," he said.

"I do not think that the Syrian government's position is reversible. I think it is doomed and we should all now start dealing with a post-Assad reality."

Shortly after the address, Al Arabiya reported Kuwaiti parliamentarians called on members of the GCC -- a bloc of resource-rich monarchies in which Saudi influence is extensive -- to recall ambassadors from Damascus.

Saudi Arabia has acted as a mediator in neighbouring Yemen, and is hosting its President Ali Abdullah Saleh, who went there for medical treatment after being wounded in a bomb attack when protests against his rule turned into open conflict.