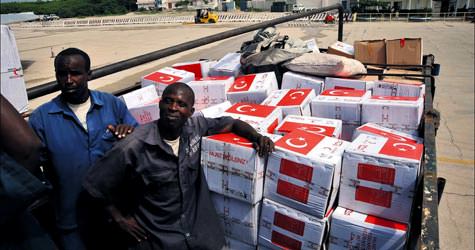 Humanitarian aid sent from Ankara in two cargo planes has reached the Somali capital of Mogadishu. Distribution of the aid began immediately after the materials were received by Turkey’s Red Crescent officials.

The humanitarian aid obtained by donations from an aid campaign spearheaded by Sabah Newspaper made its way yesterday to Somalia's capital Mogadishu. Turkey's Red Crescent Director Tekin Küçükali states that the Somalis met the plane with prayers and a grand display of love.

Landing in the capital Mogadishu to loving demonstrations, the boxes, filling up two cargo planes, were transferred to trucks by airport and Red Crescent staff. After which, the materials were then immediately sent out to be distributed to the camps.

The cargo planes were carrying 50 tons of humanitarian aid; approximately enough cover the needs of 1,500 families for a month. Each box was packaged to provide supplies lasting for one month for one family and included goods such as baby food, milk powder, children's crackers, pasta, rice, lentils, chick peas, oil, sugar and flour as well as cleaning and medical supplies.

WELCOMING BRINGS MANAGER TO TEARS
Mentioning that Turkey has seriously rallied in terms of humanitarian aid, Turkey's Red Crescent Director Tekin Küçükali states that that is why he is joined by Red Crescent General Manager Ömer Taşlı and his team in Somalia.

Küçükali goes on to state: "This team met both of the planes upon arrival. An interesting thing happened while we were receiving the planes, Our General Manager called and in tears stated that when our planes were made visible people began to say the 'Turkish planes are coming' and embraced the prayer position. Our planes were therefore received with prayers as the locals said, the 'Turks have come and we will be saved now.' Our arrival was a legend for them.
At present, as a country we are currently providing the largest amount of humanitarian aid. Hopefully this aid will work as an example to other countries. We are now preventing the deaths of those innocent people here.
We have rented out a number of large depots and some were given to us by the Somali government. This is here we will be receiving all of the food to come."
After the aid was received, TİKA Chairman Serdar Çam and Turkey's Red Crescent General Manager Ömer Taşlı and their teams who were there in Mogadishu paid visits to the camps and met with Somali Prime Minister Muhammed Abdullahi Muhammed. During the meeting, the Turkish aid committee was briefed by Prime Minister Muhammed on what were priority needs.
Çam states, "We are currently proceeding with this process while our Prime Minister also closely follows. Turkey is not only here to provide air, but is also in a position to assist in their reaching a point of development, international commerce, economy, agriculture and industry."

The Istanbul Chamber of Commerce (İTO) Administrative Board has decided to offer 300,000 TL in aid for East Africa. The Alanya Chamber of Commerce and Industry has announced they will be providing 10,000 TL of aid to the TOBB campaign. Ministry of Health Press Undersecretary Mine Tunçel has decided not to hold a circumcision ceremony for her seven-year-old son Ahmet Arhan Tunçel and to instead donate 1,000 TL to the children in Africa.

VakıfBank has donated 500,000 TL to the Somali aid campaign, with Turkey's Exporters Assembly also donating 500,000 TL to Turkey's Red Crescent campaign. Mehmet Özhaseki, Kayseri's Metropolitan Municipal Mayor, who has also donated 100,000 TL to the aid campaign, states pointing out that the deaths of 29,000 children within the time span of three months is an affront to humanity "It is an obligation for us to provide this aid. I cannot sleep here if people there are going hungry."

Rice producers from Balıkesir's Gönen have sent a total of 21 tons of rice, while Eti Bisküvi provided five tons of biscuits.

Those who want to contribute to the aid campaign for Somalia can do so in the following ways:

By Bank: All banks in turkey have an account designation for donations for Turkey's Red Crescent.
To donate to the Prime Ministry Turkish Cooperation and Recovery Administration (TİKA), the account number at Halkbank is Branch code: 408
TL: 05000014
Dollar: 58000095
Euro: 58000096
INTERNET: www.kizilay.org.tr
TELEPHONE: 168 is a free donation and information line.
POST OFFICE: 2868 number Red Crescent Postal check.
RED CRESCENT: All Red Crescent branches.
To DONATE BY SMS MESSAGEING: Write Sabah and send to 2868 to donate 5 TL.
TO SEND A TURKISH RED CRESCENT KITCHEN SET-FOOD BOX: With a 200 TL donation, one five-member family could be fet for one month.

Meanwhile, the 57-nation Organisation of the Islamic Conference will meet in Istanbul on Aug. 17 to discuss efforts to relieve a famine in southern Somalia and surrounding areas hit by drought, Turkey's state-run Anatolian news agency reported on Tuesday. Turkey's Foreign Minister Ahmet Davutoğlu is expected to visit Africa in the second half of this month.