London police hold the line but looters free to steal 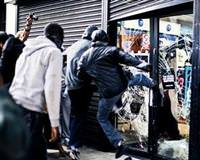 The thin blue line of police held in Woolwich -- but their job was to protect firefighters tackling blazing businesses, not prevent looters in this poor southeast London district from emptying the shelves of stores they usually shop in.

Half a dozen police officers in riot gear and their trademark dark blue uniforms guarded fire crew hosing down the blazing Wetherspoons bar, too few to prevent the wholesale looting of Powis Street just a stone's throw away.

Paving stones piled in the street for workmen giving the rundown area a facelift were seized upon by the looters to stave in the windows of mobile phone shops, pawnbrokers, jewellers, electronic goods and gaming stores, clothing boutiques and designer footware stores.

Looters made off with their haul in suitcases stolen for the purpose. Others emerged from shattered store fronts with armfuls of women's clothing or boxes of designer sports shoes.

Some balanced flatscreen televisions or gaming consoles on their heads, slowly edging down the street, more afraid of slipping on the broken glass than arrest.

Many wore hoods or masked their faces but many more made no attempt to hide their identity from a police force they knew was too stretched to intervene.

Far from being angry or edgy, the atmosphere when the looting was at its height was mostly relaxed, with many in the crowd giggling or looking on in wonder at the flames, queuing up to take photographs or shoot video of the burning stores on their mobile phones and cameras.

Prime Minister David Cameron promised to mend 'Broken Britain' when he came to power in May last year, but some local residents blamed his austerity policies for the violence sweeping London and other British cities.

"The people are angry," explained Joshua, a Nigerian resident of Woolwich who has lived in Britain 38 years. But that view was not universal.

David Hill, 33, who works in the financial services sector, said: "They have burned out the places that they drink in, that's the funny thing about it. I can understand the jewelry, that's fair enough, but this is absolutely outrageous."

Simon Mills, manager of a pawnbroker and jewelry firm that claims to be the oldest business in Woolwich, said he had lost goods worth upwards of 60,000 pounds ($98,000).

"I just don't know if we'll be able to bounce back from it. I don't think terrorists could have done a better job than what they have done here," he said. "But when you look over the road at Wetherspoons you think it could have been worse."

Some store owners said they had closed early on Monday due to rumors that Woolwich, a down-at-heel district on the southeastern banks of the Thames, would be next to "kick off."

According to bystanders, the looting was organised on Twitter and the instant messaging network of a popular mobile phone network. However, many accounts smacked of hearsay.

"What has happened here overnight has destroyed jobs," he said standing outside a row of stores with their windows smashed in. "Those people are out of work, so to try and suggest that it's in some way a protest, as some people are calling it, or a response to the economic situation is frankly ludicrous."