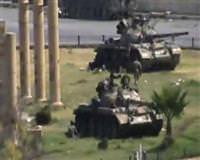 Syrian forces killed at least five civilians and moved into a town near the Turkish border on Tuesday, activists and witnesses said, even as Turkey's foreign minister pressed President Bashar al-Assad to halt assaults on protests against his rule.

The anti-Assad Syrian Revolution Coordinating Union said two sisters, aged 6 and 11, were among five bodies brought to a hospital in the town of Tibet al-Imam after military raids on villages around the besieged city of Hama.

Despite growing international condemnation, including a sudden wave of Arab criticism, Assad's forces also continued an offensive in the eastern city of Deir al-Zor.

Turkish foreign minister Ahmet Davutoğlu met Assad to press for a halt to the crackdown in which activists say at least 1,600 civilians have died, making it one of the bloodiest of the upheavals sweeping the Arab world.

Neighbouring Turkey has grown increasingly critical of the violence but earned a sharp rebuke on Sunday when an Assad adviser said Syria would not accept interference in its affairs.

US secretary of state Hillary Clinton had asked Mr Davutoglu to reinforce a demand from Washington that Syria return the army to barracks immediately and release prisoners.

Syria has faced nearly five months of protests against Assad's 11-year rule, inspired by Arab revolts which overthrew leaders in Egypt and Tunisia earlier this year.

Last week the Syrian president sent troops and tanks to quell the city of mostly Sunni Muslim city of Hama in central Syria and the army launched a similar assault on Sunday against Deir al-Zor.

Witnesses said armoured vehicles entered the town of Binnish, 30km from the Turkish border, at dawn today. "The whole town has been joining in night rallies [against Assad] after Ramadan prayers," a resident said.

An armoured column also pushed towards the centre of Deir al-Zor, with troops storming houses and making arrests on the third day of an offensive on the provincial capital of an oil region bordering Iraq's Sunni heartland, a resident said.

Turkish prime minister Tayyip Erdoğan has described Syria's uprising as a domestic issue for Turkey, because of their 850km shared border.

Increasing the pressure on Dr Assad, Sunni Muslim power Saudi Arabia issued a blunt warning that he risked turmoil unless he stopped the bloodshed and adopted reforms. Kuwait and Bahrain followed the kingdom in recalling their ambassadors.

The withdrawal of envoys left Dr Assad with few diplomatic friends bar Iran. Western states have imposed sanctions on his top officials, while states with close ties to Damascus such as Russia and Turkey have warned Dr Assad he is running out of time.

Nevertheless, no country has proposed military action such as that launched against Libya's leader Muammar Gadafy.

In Deir al-Zor, a resident said yesterday 65 people had been killed since tanks and armoured vehicles barrelled into the city, 400km northeast of Damascus on Sunday.

Syrian authorities have denied that any Deir al-Zor assault took place. The official state news agency said "not a single tank has entered Deir al-Zor" and reports of tanks in the city were "the work of provocateur satellite channels".

The authorities say they have faced attacks since the protests erupted in March, blaming armed saboteurs for civilian deaths and accusing them of killing 500 security personnel.