England thanks Turks with shopping 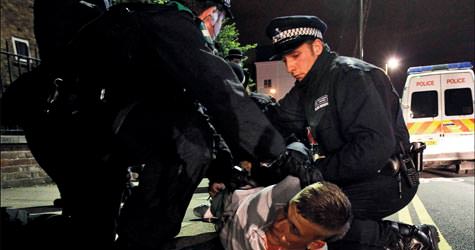 "Bloody foreigners..." someone tweeted when word circulated that Turkish and Kurdish people were gathering on the streets of east London to defend their shops and cafes from looters.

"...They come to our country and protect our neighbourhoods and communities."

Turks are continuing to receive praise for the way they diffused the situation in Dalston. After the saying, "Thank Turk, It's Saturday' began to surface, English residents from Dalton and the surrounding region chose to open up a Facebook page under the same title dedicated to staging a campaign of gratitude for Dalton's Turkish shopkeepers. The Facebook page, which hosts a Turkish flag along with 3,875 friends, has been organized by Brits to inspire fellow citizens to shop in Turkish stores on Saturday.

'GET A KEBAB AND A SHAVE'

The Facebook page opened by Nick Horne states; On Monday night as the police were over-run a group of Turkish & Kurdish business owners from Dalston stepped up and chased off the nasty little rioters. They protected their businesses, our streets, our homes and most of all our community. Since then it's been a quiet week on Dalston Kingsland High St. This Saturday we plan to turn out to support the Turkish and Kurdish owned businesses in and around Dalston. So get up, grap a paper from a corner shop, go to a local cafe, get your hair done at a Turkish barber shop, go to one of our lovely Turkish supermarkets to get yoru shopping in, eat oru at a restaurant or grab a takeaway Pide or kebab then have some drinks in a Turkish bar. Come on Dalston this is payback time! Invite your neighbours, invite yoru family, invite your friends, people who live in Dalston or just love to hang out here. Everyone's welcome!"


From a Polish shop assistant photographed jumping out of her burning building to a Malaysian student filmed being robbed after he was beaten, many of the headline-grabbing victims of London's riots were foreigners.

That should be little surprise. These days most Londoners are in fact foreigners. According to figures from Britain's Office of National Statistics, more than half of the city's residents -- 52.5 percent -- were born outside the UK.

Many of today's Londoners came, or fled, from countries with a history of violence, arbitrary justice and war. When the worst riots in a generation hit the capital last week, its cosmopolitan masses mostly stayed calm and carried on.

Dalston is typical of today's London in its eclecticism. Turks started moving here a generation ago, and now the main drag hosts rows of Halal butchers, baklava shops with stacks of shiny sticky sweets, kebab cafes and Turkish social clubs where knots of middle-aged men clog the doorway after a game of pool.

Among these shops are a Caribbean bookstore, Asian-owned shops and African-run taxi companies.

The owner of Dalston's Stokey Grocery, a Turkish man named Aziz, said he joined other business owners in the street this week to make sure there were no problems as news spread that rioters were coming into the neighbourhood.

"We were helping the police," he said.

When Turkish immigrants started filling Dalston in the 1990s, it was a run-down district, Aziz said. They gradually improved it, opening businesses and looking out for each other.

"Here, this area in 1990 was the most dangerous area. Now it is clean, comfortable area. A lot of shops now are 24 hours. Before they would not open late," he said. Of the local shopowners, "everybody knows each other. It doesn't matter if they are English or Turkish or Pakistani."

A few doors down, Louis Essuman, who moved to London from Ghana in the 1970s, runs a taxi service from a store-front. Footage of the riots was playing on the TV news in the corner as he spoke.

He came to London because it was safer and more law-abiding than his home country. This week he has been getting phone calls from relatives back in Africa, wondering if he is ok.

He tells them he's fine. His children, London-born, are smart enough to stay out of trouble.

The drivers who work for him are all immigrants, hailing from Africa, Iran, Turkey and elsewhere. They were drawn, he says, to a city that has a reputation worldwide as a place where those willing to work hard can earn an honest living.

"We know that London is a safe country, compared to other European countries. I call it a haven for immigrants. So this was a shock," he said of the riots.

Like most business owners, he has little patience with the rioters. The police should have used water cannon before the trouble spread, he said.

The riots began with a protest against the police shooting of a black suspect, but Essuman saw little to link that incident with the arson and looting that followed.

"I'm a black man myself. A foreigner," he said. "The death of that young man has nothing to do with this sort of thing. It's hooliganism, pure and simple."

"GOOD REASON TO GO BACK"

London's newest big group of migrants are workers from the former Communist countries that joined the European Union in the last decade. Britain was the only major EU country to grant immediate right to work to all citizens of new EU countries when the bloc added 10 mainly East European members in 2003.

Poles, now about a half-a-million strong, have become the largest community of non-British citizens in the UK. Unlike migrants from further afield, they find it easier to come and go with the rises and falls in the job market.

Some have already gone back home because of Britain's economic slump since 2008. Ela Sobolewska, a reporter for the Polish-language newspaper Dziennik Polski, said some of her friends were talking about the riots as the final straw.

Jay Dattani, an Asian from Tanzania, came to Britain nearly 40 years ago and runs Dalston Stationery across the road from Essuman's taxi stand. He said London still offers the chance to make an honest living that first attracted him to the city. He kept his shop open during the riots.

"Let them come. I have weapons in the back. I can look after myself," he said. But like many Londoners, native and foreign-born alike, he pines for simpler times.

"It was easier in the early days. It's getting out of hand now," he said. "Too many foreigners, isn't it. Just taking all the jobs. Taking advantage of the system."