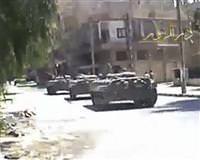 Syrian forces shot dead at least 20 protesters Friday, activists said, as tens of thousands demanded the overthrow of President Bashar al-Assad, chanting "we will kneel only to God."

Defiant protest marches unfolded across the country despite a military crackdown that has intensified since the beginning of the fasting month of Ramadan, triggering sanctions and condemnation abroad.

These included protests in the cities of Hama and Deir al-Zor, both of which have been stormed in tank offensives launched by Assad at the beginning of the Muslim holy month.

"Assad wants to finish off the uprising before international pressure becomes too much for him. But people have gone out of almost every major mosque in Deir al-Zor, meters away from tanks that occupy every main square and roundabout," a resident said.

Another witness said a fire broke out in the Harwil mosque after security forces shot at it. "The whole neighborhood is echoing with the sound of bullets. Worshippers are running to take cover in alleyways," he said by telephone.

Military Intelligence agents fired live ammunition at protesters coming out of several mosques in Deir al-Zor, killing three people, a doctor said, adding that a 66-year old man was in a coma after a bullet hit him in the neck and went through his lung.

The doctor, who did not want to be named, said at least 80 people had been killed in Deir al-Zor since Sunday, when Assad's forces, backed by tanks, stormed the city, capital of an oil producing province that borders Iraq's Sunni heartland.

"Most of the casualties were hit by sniper fire. People blame Military Intelligence for the killings more than the army. I think Military Intelligence personnel in Deir al-Zor will have a rough time once the army withdraws," said the doctor, referring to the feared secret police division, which is in charge of ensuring loyalty to Assad among the army.

The Local Coordination Committees, a grassroots activists' group, said among the deaths across Syria were six in the Damascus suburbs, including a pregnant woman and a 16 year old boy, and two civilians in the northern province of Idlib on the Turkish border.

The Syrian Observatory for Human Rights said security forces killed four protesters in the commercial hub of Aleppo and one man was killed by a sniper in the city of Homs.

Residents said four people were also killed in Hama, just days after the army completed a week-long assault on the city which became a symbol of defiance to Assad's rule after huge crowds gathered weekly to demand his overthrow.

"Go, Bashar!" protesters chanted in rallies held in the coastal cities of Latakia and Baniyas, as well as across the southern province of Deraa where the uprising against 41 years of Assad family domination first flared nearly five months ago.

Syrian state television said two members of the security forces were killed by gunmen in Douma, just outside Damascus.

Syrian authorities have barred most independent media, making it difficult to verify events on the ground in the unrest, among a series of popular revolts against repressive power elites across the Arab world this year.

Assad's forces have intensified assaults on towns and cities across the country since the start of Ramadan nearly two weeks ago to try to subdue mounting dissent against the ruling family, despite threats of new U.S. sanctions and calls from Turkey and fellow Arab states to end attacks on civilians.

Activists said at least 19 people were killed in raids near the Lebanon border and in the country's Sunni Muslim tribal heartland Thursday. Assad's family belongs to the minority Alawite sect that runs Syria.

At least than 1,800 civilians in all have been killed in the military crackdown on protests against Assad, human rights organizations say.

U.S. Secretary of State Hillary Clinton said Friday Syria would be better off without Assad and called on nations that buy oil or sell arms to Syria to cut those ties.

Syria's oil industry, with which the Assad has close links, generates most of the state's hard currency from crude output of 380,000 barrels per day.

The global campaign group Avaaz urged European nations on Friday to impose immediate restrictions on purchases of Syrian oil to "dry up" funding of Assad's forces. It said over 150,000 Avaaz members had signed a petition to that effect.

Asked why the United States had not called on Assad to step down, Clinton said Washington had been "very clear" in its statements about Assad's loss of legitimacy, and wanted other nations to add their voices.

Wednesday Washington imposed sanctions on Syria's largest bank and its biggest mobile telephone company, controlled by Assad's cousin Rami Makhlouf. The next day, U.S. Ambassador to Damascus Robert Ford said more sanctions would follow if the Syrian authorities did not halt the violence.

In addition to the Friday protests, nightly Ramadan prayers, or "tarawih," which follow the breaking of the fast, have given more Syrians a focus for daily protest marches.

In neighboring Lebanon, hundreds of people demonstrated in the northern, mainly Sunni Muslim, district of Akkar in support of the Syrian protesters.

Regional powers Turkey, Saudi Arabia and Egypt have all applied pressure on Assad to stop the violence.

Turkish President Abdullah Gul warned Assad not to leave reforms until it is too late in a letter delivered to the Syrian president earlier this week.
Last Update: Aug 13, 2011 10:06 am
RELATED TOPICS