Israel firm on no apology to Turkey for ship raid 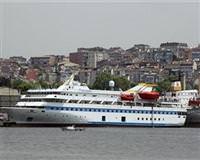 Israel will stick to its refusal to apologize to Turkey for killing nine of its citizens on a Gaza-bound ship, officials said on Wednesday, a position Ankara said would sink any prospects for reconciliation.

The decision, which officials said Prime Minister Benjamin Netanyahu conveyed to U.S. Secretary of State Hillary Clinton in a telephone call, was made days before the anticipated publication of the findings of a U.N. inquiry into the seizure of the Mavi Marmara last year.
The so-called Palmer report was repeatedly delayed to allow for Israeli-Turkish rapprochement talks amid concern in Washington at the rift between two countries that had been strategic partners in an increasingly stormy Middle East.
"We're firm on not apologizing," the Israeli official said in comments later confirmed by Foreign Minister Avigdor Lieberman in an interview with an Israeli television network, in which he called it "a wise and correct decision."
Pointing at uprisings in the Arab world since January which Israel has been watching warily, Lieberman added that any "message of weakness today would be the most dangerous from Israel's standpoint."
Turkish Prime Minister Tayyip Erdoğan, asked by reporters about Israel's comments, replied that "as long as Israel does not apologize, does not pay compensation and does not lift the embargo on Palestine, it is not possible for Turkey-Israeli ties to improve."
Turkish Foreign Minister Ahmet Davutoğlu said in separate comments that "Israel is facing a choice: deeper relations with Turkey or open a gap with the Turkish state that will not be overcome very easily."
The Mavi Marmara was part of an activist flotilla bringing humanitarian aid to Gaza when it was boarded by Israeli marines on the Mediterranean high seas on May 31, 2010. The marines shot dead nine Turks, including a dual U.S. citizen, during fierce deck brawls.
Netanyahu had voiced regret over the killings, and Defense Minister Ehud Barak, a centrist in his conservative coalition government, has since stirred debate inside the cabinet by proposing Israel offer a diluted apology in hope of restoring ties with what was once a rare Muslim ally of the Jewish state.
Barak had also thought such a step would help indemnify Israel's navy personnel against lawsuits abroad.
Israeli officials, citing advance copies of the report by a U.N. panel headed by former New Zealand Prime Minister Geoffrey Palmer, have said the document would vindicate Israel's blockade on the Hamas-ruled Gaza Strip.
Israel calls its Gaza blockade a precaution against arms reaching Hamas and other Palestinian guerrillas by sea. Palestinians and their supporters describe the blockade as illegal collective punishment.
Lieberman said the report he said would be published on August 23 "is very positive toward Israel."
In his remarks at a news conference in Istanbul, Davutoğlu suggested Turkey would not accept such an outcome. "If the Palmer Report does not contain an apology, both sides and the United States know what we will do," he said.
In Washington, State Department spokeswoman Victoria Nuland confirmed that Netanyahu and Clinton had spoken but denied the U.S. had asked Israel for any apology. "That report is inaccurate," she said.
Kurt Hoyer, spokesman for the U.S. embassy in Tel Aviv, said Washington wanted Israel and Turkey "to look for opportunities to get past the current strains in their bilateral relations."