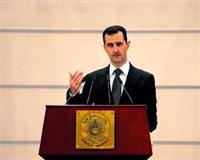 Syrian President Bashar al-Assad warned the West his nation would not tolerate any outside interference, saying that anti-government unrest sweeping the country had become more militant.

Assad faces growing Western calls to step down over his harsh crackdown on more than five months of pro-democracy protests in which the United Nations says around 2,000 civilians have died.

No country has proposed the kind of action against Syria which NATO forces have carried out in support of Libyan rebels seeking to topple Muammar Gaddafi. But the West has called on Assad to step down and Washington has imposed new sanctions.

"As for the threat of a military action ... any action against Syria will have greater consequences (on those who carry it out), greater than they can tolerate," Assad told Syrian television on Sunday.

"As for the security situation (it) has become more militant in the recent weeks," Assad said. "We are capable of dealing with it... I am not worried."

The opposition has dismissed Assad's promised political reforms and many opposition figures have rejected his call for a national dialogue, saying there can be no discussion while security forces continue to kill protesters.

Seeking to unify their fragmented movement, opposition figures have gathered in Turkey to nominate a broad-based council to support the uprising. Organizers expect to finish talks within days.

"The discussions are focusing on moving away from quotas toward a more merit-based council," Professor Wael Merza, one of the delegates, told Reuters. "We expect to reach consensus on the list of names by the end of this week."

Syria, which borders Israel, Lebanon, Iraq, Turkey and Jordan, has regional influence because of its alliance with Iran and its role in Lebanon, despite ending a 29-year military presence there in 2005. It also has influence in Iraq and supports militant groups Hamas, Islamic Jihad and Hezbollah.

Assad's government has blamed armed groups for the violence and has said more than 500 soldiers and police have died since the unrest erupted in March.

State news agency SANA said on Sunday five soldiers killed by gunmen in Homs and the southern province of Deraa were buried on Sunday.

"The regime wants to find excuses for the repression. When Assad says he is prepared to deal with the Syrian uprising he means he is going to kill more protesters," Moulhem al-Droubi, of the Syrian Muslim Brotherhood, said on Sunday.

Assad sent tanks and troops into some of Syria's biggest cities to crush dissent during the Muslim holy month of Ramadan, which started on August 1.

Activists said dozens of people were arrested on Sunday during raids in northern Idlib province, while military and security forces stormed the Khaldieh neighborhood of Homs.

On Friday, Assad's forces killed 34 people, including four children, in Homs and Deraa, where the popular revolt began in March, as well as in suburbs of Damascus and the ancient desert town of Palmyra, activists said.

Syria has expelled most independent media since the unrest began, making it difficult to verify events on the ground.