Rioters battle with police in Hamburg 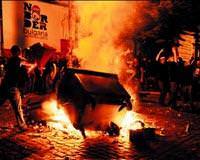 Around a thousand demonstrators threw stones and bottles at police after a riot broke out in Hamburg Saturday night and stretched into the early hours of Sunday, a police spokesman said.

The spokesman said 27 policemen were injured during the violence, which followed a street fair, and 67 rioters were arrested. The number of injured demonstrators was not yet known. Around 1,800 police were on duty at the event and used water canons and truncheons in the standoff with the rioters who erected barricades and set a police vehicle on fire. Authorities said some 5,000 people had come earlier in the day to the "Schanzenfest" street fair, which has often led to clashes between rioters and the police in Germany's second city.
Last Update: Aug 22, 2011 11:00 am
RELATED TOPICS