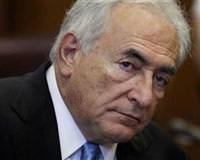 New York prosecutors asked a judge to dismiss sexual assault charges against former IMF chief Dominique Strauss-Kahn on Monday, a stunning reversal that could revive the political future of a man many had seen as the next president of France.

Prosecutors gave up hope they could convict Strauss-Kahn after losing confidence in their star witness, Nafissatou Diallo, 32, a hotel maid from Guinea who alleged that Strauss-Kahn emerged naked from the bathroom of his luxury suite on May 14 and forced her to perform oral sex.

The motion to dismiss, filed after a brief meeting with the woman and her lawyer, showed prosecutors "no longer have confidence" that Strauss-Kahn is guilty beyond a reasonable doubt because the accuser's story kept shifting.

In it they urged the judge to drop all charges. Strauss-Kahn will appear in court on Tuesday at 1130 EDT (1530 GMT).

Only three months ago, Strauss-Kahn was the world's leading financial diplomat, confidant of presidents rescuing debt-ridden nations. His downfall was shocking. Pulled from a first-class seat on an Air France flight by police, he was thrown into New York City's gang-ridden Rikers jail on charges of attempted rape.

Prosecutors in May had said the maid's complaint was "truthful" and "consistent." But the case began to crumble when prosecutors found Diallo had lied on her immigration forms about a gang rape in Guinea, lied on her tax forms and gave three different versions of events surrounding the encounter in the Sofitel Hotel in Times Square.

"The nature and number of the complainant's falsehoods leave us unable to credit her version of events beyond a reasonable doubt, whatever the truth may be about the encounter between the complainant and the defendant," the court papers said.

"If we do not believe her beyond a reasonable doubt, we cannot ask a jury to do so."

Diallo's lawyer Kenneth Thompson in a statement late on Monday after meeting with the Manhattan District Attorney Cyrus Vance and reviewing his motion, said that the state has denied the right of a woman to get justice in a rape case.

"Just a few weeks ago, DA Vance and his prosecutors were arguing in court about how strong the evidence was against Dominique Strauss-Kahn," Thompson said. "Now, today they seek to run away from that very same evidence and the seven-count indictment that a sitting grand jury returned against Mr. Strauss-Kahn."

From the outset, Strauss-Kahn, 62, had strenuously asserted his innocence. Some political supporters were convinced the allegations were part of a set-up meant to destroy his chances of unseating French President Nicolas Sarkozy in next April's election.

"We also maintained that there were many reasons to believe that Mr. Strauss-Kahn's accuser was not credible," his lawyers William Taylor and Benjamin Brafman said in a statement.

Though he is free to return to French politics, his image was tarnished by numerous tales of his forceful sexual advances. The Socialist party would have to make an exception to allow him into the presidential race at this late date. A poll released in July showed two-thirds of French people do not want him to be a candidate.

He also still faces a civil lawsuit that Diallo filed against him on August 8 and a complaint from a French writer who said he tried to rape her during a 2003 interview.

After detectives pulled him off the first-class section of a Paris-bound jet on the day of the purported attack on Diallo, his arrest sent shockwaves across the globe.

Charming and multilingual, the silver-haired Strauss-Kahn had gained esteem for reforming the International Monetary Fund as managing director, injecting it with transparency and accountability. Then his stature took a mighty fall.

The accuser, Diallo, painted a vivid picture of what she said happened in Suite 2806 of the Sofitel Hotel near Times Square, saying a naked Strauss-Kahn chased her down a hall and into the bedroom and forced her to perform oral sex.

She said she broke free and that he dragged her into a bathroom where he forced himself on her again.

But her credibility was later thrown into question when prosecutors revealed she had told authorities numerous lies, including fabricating a story about being gang-raped in Guinea in order to gain U.S. asylum. She also changed details of her story about what happened following the purported assault.

U.S. media at first kept her identity secret, respecting a practice not to name sexual assault accusers, until she came forward in an interview with Newsweek magazine and ABC television in late July.

According to her lawyers, prosecutors said they turned up a recorded conversation between Diallo and a man detained in an Arizona jail in which, speaking in the West African dialect Fulani, she said "words to the effect" that "this guy has a lot of money. I know what I am doing."

Such a conversation could provide Strauss-Kahn's defense lawyers with ammunition to attack Diallo's motives, although she denied referring to his wealth and her lawyers said the quote was not on the tape, according to an interpreter hired by prosecutors.

Strauss-Kahn resigned from the IMF four days after his arrest, while he was still being held without bail in New York's notorious Rikers Island, a massive complex of 10 jails renowned for gang violence and well known to viewers of television crime dramas.

He later was granted house arrest after posting $1 million cash bail and a $5 million insurance company bond, staying in a $50,000-a-month townhouse in Manhattan's Tribeca neighborhood with an electronic monitor clamped to his ankle. He paid another $150,000 a month for a security detail that included armed guards.

The case also brought up troubling stories from Strauss-Kahn's past as a womanizer who flirted with female journalists covering him, and it revived the story of a controversial affair he once had with a subordinate at the IMF. He was nicknamed "the great seducer."

The Paris prosecutor has opened a preliminary inquiry into a complaint filed by French journalist Tristane Banon, who says Strauss-Kahn unhooked her bra and tried to open her jeans as she kicked him in what ended up as a fight on the floor. Now free of New York charges, he must mount a new defense in France.

However, a judicial source said the French complaint was likely to be dropped as prosecutors were struggling to find evidence to support a charge of attempted rape.

A statute of limitations on a lesser crime of sexual aggression has already expired.

Other French women have seized on the cases to air their grievances about sexism in the professional sphere, shifting the conversation beyond commentaries on America's prudish views on sex to a national assessment of French machismo.

Yet his own wife, the wealthy and well-known former television journalist Anne Sinclair, seemed forgiving of his reputed behavior.

"No, I'm rather proud of it!" she told the French weekly L'Express in a 2006 interview. "It's important to seduce, for a politician. As long as I seduce him and he seduces me, that's enough for me."

It also exposed a French-American rift on the rights of criminal defendants. Many French were outraged at Strauss-Kahn's "perp walk" -- perp is short for perpetrator -- when detectives paraded a handcuffed, unshaven defendant before media cameras while the identity of his accuser was kept private.

In the end, the accuser's credibility issues were so severe that the Manhattan District Attorney's office agreed to release Strauss-Kahn from house arrest without bail on July 1.