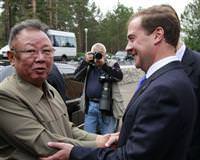 It did not set a time or date or place for the meeting but it was widely expected to take place later on Wednesday in Siberia after Kim's armoured train pulled in to Ulan-Ude, a provincial capital near Lake Baikal, on Tuesday.

"Much attention will be paid to the topic of an early resumption of six-party talks to resolve the nuclear issue on the Korean peninsula," the Kremlin said in a statement.

"Russia has consistently advocated a peaceful, political and diplomatic solution to this problem, for the restoration of dialogue and cooperation between North and South Korea."