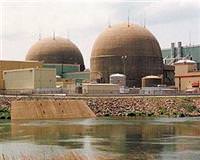 The largest earthquake to hit the East Coast of the United States in 67 years raised concerns on Tuesday about the safety of the country's nuclear power plants.

The plant lost power and automatically halted operations after the quake. While a Dominion spokesman reported no "major" damage to the facility, three diesel generators were required to kick in and keep the reactors' radioactive cores cool. A fourth diesel unit failed.

While nuclear power plants can operate safely on back-up power, failure of generators was a key reason for the disaster at Japan's Fukushima Daiichi plant after a 9.0 magnitude quake and tsunami in March.

"Nuclear power plants lose a significant margin of safety when they're forced to rely on these emergency back-up systems," said Paul Gunter, director of reactor oversight at Beyond Nuclear, an anti-nuclear lobby group.

The U.S. Nuclear Regulatory Commission (NRC) said North Anna's shutdown was safe and posed no risk to the public. It wasn't clear when off-site power could be restored or when the 1806-megawatt plant, which remained on alert, could restart.

Dominion spokesman Jim Norvelle said the plant was designed to withstand an earthquake of up to 6.2 in magnitude.

But some experts expressed concern about the narrow margin between the design metrics and the quake's size.

"It was uncomfortably close to design basis," said Edwin Lyman of the Union of Concerned Scientists, which has pushed for stronger nuclear regulations.

"If Fukushima wasn't a wake-up call, this really needs to be to get the NRC and industry moving to do seismic reviews of all the nuclear power plants in the country."

Tuesday's quake, which was felt along the East Coast as far north as Canada, was the region's largest since a 5.9 quake hit New York State in 1944.

North Anna's reactors are among 27 east of the Rockies that the NRC highlighted during a seismic review last year as presenting a potential hazard, due to the amount of ground-shaking they were designed to withstand.

Twelve other nuclear plants along the Eastern Seaboard declared an "unusual event" following the quake, the lowest of the NRC's emergency classification ratings. North Anna's "alert" status is one step further up on a four-step U.S. emergency scale.

Many nuclear experts say plants in the United States were designed with big margins of error built in, but last year's NRC survey found that the risks posed by earthquakes were higher than previously thought.

And Victor Gilinsky, who was an NRC commissioner at the time of the Three Mile Island nuclear disaster in Pennsylvania in 1979, said that he was concerned that safety at plants like North Anna were not being reviewed as understanding of earthquakes increases.

"It is important to review the seismic design of the plant in terms of current knowledge," he said "Instead, the NRC has been relicensing plants without any real safety review - they do not question any of the original licensing conditions, they only check to see whether the plant has a program to deal with old equipment. It's an irresponsible approach."

"The size of the vibrations from this East Coast earthquake are probably less than you would feel in a loud nightclub," Ballinger said.

Based on its 5.8 magnitude rating, the quake was almost 10,000 times weaker than Japan's quake in March and posed no tsunami risk, Ballinger said.

The last time a quake of similar magnitude hit Virginia was in 1897, the U.S. Geological Survey said. A 7.3 magnitude quake, the largest recorded in East Coast history, hit South Carolina in 1886.

Dominion is one of 11 U.S. power companies who have expressed interest in building new advanced nuclear reactors. It has proposed adding a new reactor to the North Anna plant.