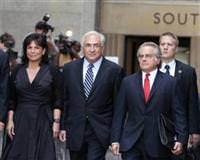 A New York judge dropped all criminal sexual assault charges against former IMF chief Dominique Strauss-Kahn on Tuesday, leaving him free to return to France and rebuild a shattered career.

The decision ended a case that brought three months of sordid headlines on both sides of the Atlantic about a hotel maid who accused Strauss-Kahn of attempting to rape her in his luxury Manhattan hotel suite and forced her to perform oral sex.

Prosecutors took the rare step of requesting dismissal of the charges after they had discovered contradictions in the maid's story and said they now questioned her credibility.

Strauss-Kahn, looking drawn, left court smiling with his wife Anne Sinclair, saying in a statement that his life had been a "nightmare" and would have nothing more to say about the case.

"I look forward to returning to my country but I have a few small matters to take care of first. I will discuss this at greater length (later)," he told reporters later.

Strauss-Kahn had been a favorite to run as the next president of France before he was hauled from a first-class seat on a flight from New York to Paris and arrested on May 14. He resigned from the IMF four days later, his political plans in tatters.

A quick comeback looks difficult in France for the top financial diplomat. Lurid details of the case and of his past sexual encounters shocked and titillated the French, usually more lenient in such matters, tarnishing his standing in the polls fallen sharply.

He still faces a civil lawsuit brought on behalf of the maid and a separate inquiry in France from a writer who says Strauss-Kahn forced himself on her during a 2003 interview.

Prosecutors from the office of Manhattan District Attorney Cyrus Vance on Monday outlined how they lost faith in hotel maid Nafissatou Diallo, a 32-year-old immigrant from Guinea.

While her account of the assault remained steadfast, Diallo told a series of lies about her past and about what happened immediately after the incident in the $3,000-a-night suite in New York's Sofitel hotel, prosecutors said.

Strauss-Kahn strongly denied sexual assault from the start. His lawyer Ben Brafman told Reuters in an interview after charges were dropped: "This encounter was quick, it was consensual and she was a willing participant,"

Diallo's physical size would have ruled out a forcible encounter, Brafman said. "She towers over him."

While evidence of semen was found on the maid's uniform, in the hotel room and on his boxer shorts, prosecutors said they were unable to prove lack of consent, leaving the case hinging on the believability of the accuser.

But with her testimony changing again and again and as more and more lies about her past emerged, prosecutors concluded in a 25-page filing, "If we do not believe her beyond a reasonable doubt, we cannot ask a jury to do so."

The maid's attorneys sought a special prosecutor and New York State Supreme Court Justice Michael Obus initially stayed his dismissal of the case for an emergency appeal. But within two hours an appeals court rejected a last-ditch effort by his accuser.

"These past two and a half months have been a nightmare for me and my family," Strauss-Kahn said in his statement. "I want to thank all the friends in France and in the United States who have believed in my innocence."

The case pitted supporters of Strauss-Kahn who said he was the victim of an overzealous U.S. criminal justice system against backers of Diallo who complained it was an example of race, class and gender where sexual assault victims are denied justice.

Diallo's lawyer Kenneth Thompson told reporters that a different standard was used for a famous man and that prosecutors would have pushed ahead with the case if the defendant had been a bus driver or a construction worker.

"District Attorney Vance has abandoned an innocent woman ... in a rape case and by doing so he has also abandoned other women who will be raped in the future," Thompson said.

Vance said in a statement that every case has its own unique set of facts and "we should not blindly advocate for one side, or be afraid to assess honestly whether we can meet our burden of proof."

Strauss-Kahn's lawyers called Vance's decision to drop the case "courageous" and said there had been a "collective rush to judgment" by U.S. law enforcement and the media.

"You can engage in inappropriate behavior perhaps, but that is much different than a crime. And this case was treated as a crime when it was not," Strauss-Kahn lawyer Benjamin Brafman said outside the courthouse.

Three months ago, Strauss-Kahn was the world's leading financial diplomat and a confidant of presidents rescuing debt-ridden nations. His downfall was shocking. Pulled from an Air France first-class seat by police, he was thrown into New York City's Rikers Island jail on charges of attempted rape.

Diallo's lawyers are also taking the case to France where they had been trying to establish a pattern of sexual abuse by Strauss-Kahn and had tried to contact other women who may have had similar encounters.

Strauss-Kahn needs to explain "how in nine minutes he was able to convince a woman who he had never met before to engage in a sexual relationship on a hotel floor," said Douglas Wigdor, another Diallo lawyer. He said there was no explanation other than sexual assault.

Diallo's French attorney Thibault de Montbrial said there had been pressure on potential witnesses in France not to speak up about similar incidents involving Strauss-Kahn.

Strauss-Kahn, a former French finance minister, could make a dramatic return to French public life, but with his image tarnished by all the media attention, most political analysts doubt he would risk competing with President Nicolas Sarkozy on April's ballot.

"Whatever has been said, a man with the abilities of Dominique Strauss-Kahn can be useful to his country in the months and years to come," Francois Hollande, the front-runner among six candidates for the Socialist primary, told France Inter radio.

Asked whether Strauss-Kahn could take part in the October vote to choose the party's presidential candidate, Hollande said: "That depends on him." [ID:nLDE77L0SE ]

French Socialists welcomed the dropping of charges and said they hoped Strauss-Kahn would return to public life where his expertise on global economics was sorely needed.