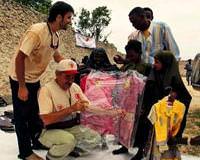 According to figures from the Prime Ministry's Department of Natural Disasters and Emergencies (AFAD), as of yesterday at 12:00, the Prime Ministry AFAD had collected 86.5 million liras, the Department of Religious Affairs collected 142 million liras, while other campaigns have managed to collect a total of 164,891 liras of aid. The combined total of all donations collected for Somalia has reached 393,391 liras. The announcement also noted that with AFAD's coordination, eight planes and four ships have transported 12,000 tons of humanitarian aid totaling 31 million liras to Somalia.
Last Update: Aug 30, 2011 4:28 pm
RELATED TOPICS