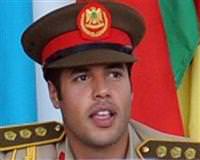 Libyan rebels are almost certain that Muammar Gaddafi's son Khamis and his intelligence chief Abdullah al-Senussi have been killed during fighting with their units, the top rebel military spokesman said on Monday.

If true, their deaths would mark the highest-profile casualties on the Gaddafi side since an uprising began six months ago aimed at ending Muammar Gaddafi's 42-years in power.

"We have almost certain information that Khamis Gaddafi and Abdullah al-Senussi were killed on Saturday by a unit of the national liberation army during clashes in Tarhouna (90 km southeast of Tripoli)," spokesman Ahmed Bani told Al Arabiya television.

However, Khamis has been reported dead twice before during the uprising, only to reappear, and Mustafa Abdel Jalil, who heads the rebel National Transitional Council, told Al Jazeera television on Monday that he did not have any official information about Khamis's death.

Colonel Al-Mahdi Al-Haragi, in charge of the Tripoli Brigade of the rebel army, said earlier that he had confirmation that Khamis, who commanded an elite brigade suspected of atrocities, had been badly wounded and died of his wounds in hospital.

A U.S. official, speaking on condition of anonymity, told Reuters the United States could not yet independently confirm Khamis's death but said similar information was being received in Washington from "reliable sources."

Earlier on Monday, prosecutor Luis Moreno-Ocampo of the International Criminal Court (ICC) told Reuters he may apply for an arrest warrant for Khamis.

Human Rights Watch said members of the Khamis Brigade, a force commanded by him, appeared to have carried out summary executions of detainees whose bodies were found in a warehouse in Tripoli.

The Hague-based ICC has already approved warrants for the arrest of Muammar Gaddafi and another of his sons, Saif al-Islam, as well as intelligence chief Senussi on charges of crimes against humanity.

Rumours circulated in March that Khamis had died after a dissident Libyan air force pilot deliberately crashed his jet into the Gaddafi compound and in August the rebels claimed to have killed him and Senussi. After both reports Khamis appeared on Libyan television to prove he was still alive.

Khamis was wounded in a 1986 U.S. air attack on Tripoli ordered by President Ronald Reagan. However, he took up a military career as commander of the 32nd Brigade, one of Libya's best equipped military formations that played an important role in the government's counter-insurgency campaign.

Muammar Gaddafi's wife and three of his other children including two sons entered Algeria on Monday morning, Algeria's Foreign Ministry said, drawing criticism from Libya's rebels who said sheltering the family was an "act of aggression."