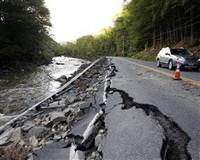 New Jersey and Vermont struggled with their worst flooding in decades on Monday, a day after Hurricane Irene slammed an already soaked U.S. Northeast with torrential rain, dragging away homes and submerging neighborhoods underwater.

The massive storm churned up the U.S. East Coast over the weekend killing at least 38 people in 11 states, in addition to three who died in the Dominican Republic and one in Puerto Rico when the storm was still in the Caribbean, authorities said.

Spared from Irene's worst fury, New York City went back to work on Monday despite a partially crippled mass transit system and power outages that left 100,000 customers in the metropolitan area and nearly 1 million in the state without electricity.

Overall, some 5.1 million homes and businesses were still without power from North Carolina to Maine, and utilities said it could take days to restore electricity in more accessible areas and weeks in the hardest-hit regions.

Total economic damage could reach $20 billion, Standard & Poor's Senior Economist Beth Ann Bovino said. Hundreds of thousands of homes suffered damage, raising questions about how much would be covered by insurance as many homeowner policies do not cover flood damage.

In Fairfield, New Jersey, about 20 homes near the Passaic River were submerged, some in at least five feet of water. Some people waded chest high or rode canoes down the street, while others just sat and witnessed the flood from their stoops.

"This is the worst flood we have ever had," said Mike Chiafulio, 52, who could only watch as the water continued to rise around his mother's house. He said the flooding exceeding what he remembered from notable floods in 1968 and 1984.

The leafy suburb of Maplewood some 20 miles west of New York City was jarred by the sound of whirring generators, sirens and pumps emptying water from flooded houses.

Hundreds of thousands of people in New Jersey could be without electricity, water supplies or gas for days to come, their comfortable towns strewn with felled trees and branches blocking main roadways.

"We've had major rains before but we've never had flooding like this," said Ben Cohen, a retired judge who lives in Maplewood. "I can only vouch for the last 38 years but nothing even can come close to this."

Dumped from a raft at a man-made waterfall in the river, one teen was clinging to a log and the other to a broken tree limb in the thundering current, Polo said. The rescue took about an hour, he said.

"They were grateful, to say the least," Polo said.

"It's going to take time to recover from a storm of this magnitude," President Barack Obama told reporters in Washington. "The effects are still being felt across much of the country, including in New England and states like Vermont where there's been an enormous amount of flooding.

"I'm going to make sure that FEMA (Federal Emergency Management Agency) and other agencies are doing everything in their power to help people on the ground."

Vermont officials called it the state's worst flooding since 1927.

New York City subways returned to service, but many commuter lines to the city and national train carrier Amtrak were disrupted due to tracks that were flooded or blocked with fallen trees and debris.

While Irene failed to produce the devastation many had expected when New York City preemptively ordered unprecedented evacuations and a shutdown of its mass transit system on Saturday, it still left hundreds of thousands of homeowners with flood damage, especially in New Jersey and Vermont.

"I keep being somewhat disappointed by some of the national press that think because Manhattan wasn't hit, everything is fine. We're not Manhattan, but we have human lives here in Vermont, too," Governor Peter Shumlin said after surveying washed out roads and bridges and homes bobbing in the water.

Shumlin visited the Whetstone Studio for the Arts in Brattleboro, an artsy community of 12,000 along the Connecticut River. Gushing water ate away at the building and left its second floor dangling precariously over the flood.

Some 5 to 15 inches of rain fell over a 24- to 36-hour period in northeastern states, said David Vallee, a hydrologist with the National Weather Service, creating moderate to major flooding in parts of eastern New York state, the Connecticut River valley and much of northern New Hampshire and Vermont.

Fairfield, New Jersey, home to more than 7,000 people, was in danger of becoming an island as flooding from the Passaic River was expected to surpass that of a memorable flood in 1984, Essex County Sheriff Armando Fontoura said.

"We are surrounded already," said Gail Dupas, 36, who fled to a hotel after floodwaters on her street reached neck deep. "It's devastating. You have to grab what you can. Anything that's irreplaceable."

Alex Adams, 35, looked relieved as a Maplewood fire truck arrived at his house to pump out more than two feet of water that accumulated in his basement.

"It obliterated everything but we were most concerned about getting electrocuted," Adams said.

"My wife and I were in there pulling out everything when we realized water was over the outlets."

Even the mega wealthy were inconvenienced by Irene. Hedge fund magnate David Tepper was forced from his plush office in Millburn, New Jersey, as the fund's main offices lost power. Tepper is founder of hedge fund Appaloosa Management LP.

The costly cleanup will also further strain budgets of state and local governments, where economies have not recovered from the recession.

"It's a hit but not a fatal hit," said Joseph Seneca, a professor at Rutgers University's Edward J. Bloustein School of Planning and Public Policy. "The ability of states to respond (to the hurricane) is more constrained," Seneca said.