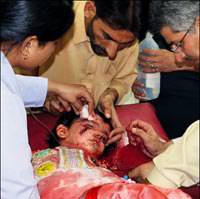 Two women and two children were among the dead and about 20 more were wounded in the blast in Quetta, the provincial capital of Baluchistan, which has been plagued by sectarian and separatist militant violence for years.

"According to initial information it appears to be a suspected suicide car bombing but we are investigating," a top police official, Hamid Shakeel, told Reuters.

Another police official, Ayaz Haider, said it was a sectarian attack and occurred in an area mostly inhabited by the Shi'ite Hazara community.

About 10 cars caught fire after the explosion, which also damaged nearby houses.

There was no claim of responsibility.

The attack came as people in predominantly Muslim Pakistan celebrated Eid al-Fitr, which marks the end of the Muslim fasting month of Ramadan.

The majority of Pakistanis are Sunni Muslims, with Shi'ites accounting for between 15 percent and 20 percent of a population of about 180 million.

Life is mostly peaceful in Pakistan between the two branches of Islam, but militants from both sides have killed thousands of people in tit-for-tat attacks since the 1980s, when Islamist militancy gained a foothold in the country.

Sunni and Shi'ite Muslims split in the 7th century over the question of succession of the Prophet Mohammad.

Baluchistan is Pakistan's biggest but poorest province, where Baluch separatists militants are fighting a protracted insurgency to demand more autonomy and control over the natural resources of their impoverished region.

Much of the violence in the past has been blamed on separatist militants.

Pro-Taliban militants are also active in the province which shares borders with Afghanistan and Iran.

Pakistan, a key U.S. ally in the war on terror, has seen a wave of violence in past years, most of it in the northwest where troops are battling militants.

There have been several attacks since al Qaeda chief Osama bin Laden was killed by U.S. special forces in a secret raid in another Pakistani garrison town in May.

A bomb blast killed at least nine people and wounded 12 in the northwestern garrison town of Risalpur last week.