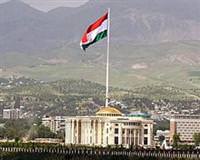 Tajikistan, the poorest of the 15 former Soviet nations, has entered the Guinness Book of Records by erecting the world's tallest unsupported flagpole, officially touted as a symbol of its upcoming independence day.

"This flag is tasked to consolidate the achievements of our independence -- peace, unity and national harmony," President Imomali Rakhmon said in a speech late on Tuesday as the giant flag was slowly raised on the 165-meter (541-feet) high pole perched in the center of the capital Dushanbe.

Rakhmon, who has ruled his Muslim nation with a firm hand since 1992, was then given a certificate issued by the Guinness Book of Records certifying that his nation now holds the tallest flagpole. It was constructed by U.S. firm Trident Support.

"A thousand years on, the Tajik people have regained the independence and statehood to which they had aspired all these years, and the national flag is one of these symbols," he said as the 700 kg (1,540 lb) flag slowly unfolded on its way to the top of the pole, illuminated by powerful spotlights.

Tajikistan, which will mark the 20th anniversary of its independence on Sept 9, pipped by 3 metres (9.8 feet) the flagpole installed in Baku, the capital of wealthier, oil producing Azerbaijan.

But the value of holding the record is considered dubious by many citizens of Tajikistan, which lies in volatile Central Asia on a major drug trafficking route from neighboring Afghanistan.

More than 100,000 people died in Tajikistan's 1992-97 civil war, and around 1 million of the country's 7.5 million population are forced to work abroad -- mainly in Russia -- to support their families at home.

World Bank data show that 47 percent of Tajiks live below the poverty line on less than $2 a day.