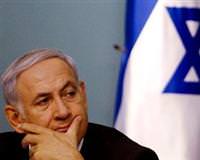 Prime Minister Benjamin Netanyahu said on Sunday he would not apologize to Turkey over an Israeli raid that killed nine Turks on a ship bound for Gaza, reiterating his position after Ankara downgraded its relations with the Jewish state.

Turkey on Friday froze all military pacts with Israel, expelled the Israeli ambassador and threatened legal sanctions after a U.N. report on the May 2010 raid failed to trigger an Israeli apology.

The report said that Israel had used unreasonable force in the raid of the Turkish vessel Mavi Marmara, but added that pro-Palestinian activists onboard mounted organised and violent resistance.

Turkey also wants an end to Israel's blockade of Gaza and compensation for the families of the those killed in the raid.

"We do not need to apologize that the naval commandos defended themselves against the violent activists," Netanyahu said at the weekly cabinet meeting, echoing a statement issued by his office on Friday.

"I hope a way can be found to overcome the dispute with Turkey. Israel never wanted its relations with Turkey to deteriorate and now too Israel is not interested in a deterioration in relations," he said.

The U.N. report by a four-member panel said Israel's naval blockade of Gaza was a legitimate security measure to prevent weapons from reaching the enclave but the amount of force used by the Israeli commandos was "excessive and unreasonable."

Publication of the so-called Palmer report was delayed repeatedly to allow for months of rapprochement talks between Israel and Turkey, once close strategic allies, at a time of wide upheaval in the Middle East.

Turkey said it will now pursue criminal cases against Israeli officials responsible for the killings on board the Marmara, which the crew said was delivering aid to Gaza.

Ankara also rejected the report's finding on the blockade and said on Saturday it would apply for an investigation by the International Court of Justice into its legality.

"To the naval commandos I want to say: In the same way that you and the rest of the IDF's (Israel Defense Force's) soldiers protect us, we will defend you in every place and at every forum," Netanyahu said at the cabinet meeting.

"But as well as this I repeat: The state of Israel expresses regret at the loss of life."

Turkey's prime minister, Tayyip Erdoğan, regarded as a hero for championing the Palestinian cause, is expected to go to Egypt later this month.

A security source in the Gaza Strip said Erdoğan was planning to visit the territory, which shares a border with Egypt. There has been no official announcement of a Gaza visit. A visit by Erdoğan to Gaza could deepen the rift with Israel.