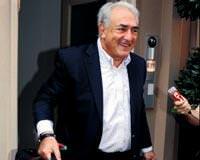 Dominique Strauss-Kahn, his presidential hopes shattered by a sex assault scandal that rocked his homeland, returned on Sunday to France facing a frosty public reception and unease among his political allies.

The former IMF chief arrived at Paris's Roissy Charles de Gaulle airport at about 7 a.m. with his wife Anne Sinclair. Police escorts whisked the couple through the terminal, past waiting media, and into a car.

Smartly dressed and smiling, Strauss-Kahn pulled up at his Parisian apartment in the chic Place des Vosges square an hour later. He waved, but made no comment as he pushed through a sea of flashing media cameras.

"I am thinking about his joy, and that of Anne Sinclair, to be back here," Jack Lang, a left-wing former education and culture minister and a neighbor of the couple, told reporters in the Place des Vosges. "What we owe him, as Socialists and friends, is to greet him here with warmth, friendship and joy."

But another bystander yelled, loudly enough to be heard by Strauss-Kahn and Anne Sinclair as they stood in the interior courtyard of their apartment building: "You are a disgusting creature. Go and get cured somewhere else."

Strauss-Kahn's public relations adviser Anne Hommel told journalists outside he would not make any statement on Sunday. "You can all leave. He won't come back out," she said.

His homecoming marks the end of a three-month struggle through New York's criminal court system after he was charged with attempting to rape a New York hotel maid. The case was dropped after her credibility was thrown into doubt.

His Socialist Party allies have cheered the withdrawal of charges against the man formerly tipped as a possible favorite to win the 2012 presidential election, but the damage to his image from the affair make his future unclear.

"It's a shame for France," said a 50-year-old woman called Claude who lives near the Strauss-Kahns. "He was my candidate."

Francois Pupponi, an ally and mayor of the Paris suburb of Sarcelles where Strauss-Kahn was mayor in the late 1990s, said he would need time to rebuild himself. "What's important is that he is back in France. He is going to be able to think about the future with more clarity," he told LCI television.

Strauss-Kahn, who was applauded by a handful of supporters among the media throng as he arrived at Roissy airport, also drew applause from his former International Monetary Fund colleagues last week when he apologized to them in person.

He has promised to also explain himself in France.

"He is going to speak. It is going to happen," Michele Sabban, a close Strauss-Kahn ally, told LCI.

The shock arrest in mid-May of the former finance minister, one of France's most talented economic thinkers, thrust the country's political landscape into turmoil, with the main opposition Socialists forced to find alternative candidates.

Many of Strauss-Kahn's former backers have now repositioned themselves behind Francois Hollande, who leads opinion polls for the Socialist primary contest, or his rival Martine Aubry.

Yet his allies say he is bound to play a role in the future, either by contributing to the Socialists' election campaign or taking a position in a future left-wing government.

Others see him opting for a role on a European or international level, following his experience leading the IMF through the 2007-09 global financial meltdown.

"We need his thoughts, his voice, and in some form, his action," Jean-Marie Le Guen, another ally, told LCI.

"The shock of the events of the last few weeks has meant he has had to sideline himself from political life, but I don't see how our country can do without his competence," he said. "At some point his voice will be important for the Left."

In the days before his homecoming, Socialists maintained an uneasy silence about Strauss-Kahn's future role.

A recent survey showed some two-thirds of voters do not want him to take a government post if the left wins power in April, an outcome opinion polls show is possible .

Despite initial anger at the way he was paraded before U.S. cameras in handcuffs, many in France are uncomfortable with the details dredged up by the case about Strauss-Kahn's private life and reputation as a womanizer.

The affair prompted soul-searching about a tradition in France of turning a blind eye to womanizing by politicians, and feminists lashed out at early statements by Strauss-Kahn allies that painted him, rather than the maid, as the victim.

Hollande has spoken vaguely of a role for Strauss-Kahn in the election with no mention of a ministerial post. Aubry has been similarly equanimous, saying this week she agreed with other women over Strauss-Kahn's attitude toward females.

Adding to his troubles, Strauss-Kahn still faces a civil case in New York and an accusation of attempted rape by a woman, Tristane Banon, 30 years his junior in France.

"Like many French people, like many Socialists, I find this homecoming and the way he's being presented to be indecent," Banon's mother Anne Mansouret told BFM television..