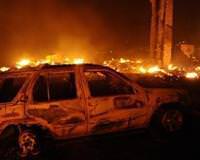 A massive wildfire east of the Texas state capital of Austin has destroyed 476 homes since Sunday and is still burning out of control, state officials said on Monday.

"That's a record in Texas for a single fire," she said of the homes destroyed.

The Bastrop fire is one of more than sixty fires which have kindled across Texas since Sunday afternoon, fueled by the gusty winds generated as Tropical Storm Lee pushed by in the Gulf of Mexico as it made landfall in Louisiana.

"The winds and the number of fires that are happening around Central Texas has caused a real strain on firefighters around this area," Bastrop County Judge Ronnie McDonald told reporters.

The Bastrop County area about 30 miles east of Austin is no stranger to wildfires, with rural brush common, residents said. But the speed the fire showed in spreading took everyone by surprise, and 19 subdivisions in the county of about 70,000 people saw evacuations in the last 24 hours.

Many people who were evacuated said they left with only the clothes on their backs, while others managed to escape with a handful of family photos.

"There was a policeman that started hollering through a big megaphone, telling us to get out of our houses immediately, now!" said a woman who lives in one of the Bastrop County subdivisions.

"This fire is nowhere near being under control," Bastrop County Emergency Management Coordinator Mike Fisher said.

Saginor said more than 250 firefighters were working on the Bastrop fire, which stretches for 16 miles with a breadth of six miles in some spots.

The Texas Forest Service said heavy air tankers have been brought in from as far away as South Dakota, and all day they have been dumping tons of water on fires all day long.

"We are also using bulldozers to create firebreaks, we are using many fire engines, we are attacking the fire directly, and we hope to have aircraft working all day," Fisher said.

Additional mandatory evacuation orders have been issued for various parts of Bastrop and also Travis County, where the city of Austin is located and is the scene of the 150 acre Steiner Ranch Fire, which had destroyed 25 homes by Monday and prompted the evacuation of more than 1000 homes.

"We know that this is tough on people who have been evacuated," said Austin Mayor Lee Leffingwell. "Especially since there is no set time for people to return."

Schools have been canceled tomorrow in the fire zone, and the Red Cross has opened several shelters to house evacuees.

"This is far from over," Leffingwell said.