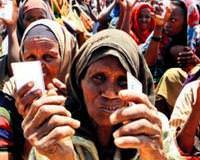 Famine has spread to six out of eight regions in southern Somalia, with 750,000 people facing imminent starvation, the United Nations said on Monday, and hundreds of people are dying each day despite a ramping up of aid relief.

"The entire Bay region has now been declared a famine area," said Mark Bowden, the U.N.'s humanitarian coordinator for Somalia.

Bay is the sixth region of Somalia to slip into famine since the U.N.'s initial declaration of famine in the war-torn country in July that has left 4 million Somalis, or 53 percent of the population, unable to meet their food needs.

Hundreds of people are dying each day and at least half of them are children, the U.N.'s Grainne Moloney said, adding she expected the remaining regions of southern Somalia to slip into famine by the end of the year.

"The rate of malnutrition (among children) in Bay region is 58 per cent. This is a record rate of acute malnutrition," said Moloney, the chief technical advisor for the U.N. Food Security and Nutrition Analysis Unit.

Aid agencies are only able to get food aid to 1 million of those in need because the al Qaeda-affiliated rebel group, al Shabaab, which controls much of the south, will not allow food shipments in.

Instead, agencies are using food and cash vouchers which hungry families can exchange for commodities in local markets.

"Focusing on the access that people have to food will help to stabilize the situation more than just looking entirely at food distributions as a solution," Bowden said.

Somalia is at the epicenter of a hunger crisis in the Horn of Africa region which is affecting over 13 million people.

While a small harvest is expected in January, following rains in October, the situation is unlikely to improve until main harvest of August 2012 and the rains are not without their risks.

"This crisis is not going away any time soon and we are still looking at, over the next 12 months, acute numbers of population in need," said Moloney.

"The rains unfortunately bring with them increased risk of disease. Cholera, malaria and measles could dramatically increase death rates amongst an already weakened population," said Bowden.

Aid agencies say they are still short an estimated $1 billion in emergency funds and Bowden blamed donors for not responding fast enough to the crisis.

"In terms of funding, I'm not sure that we still have adequate resources to address the issue of communicable diseases," Bowden said.

"Part of the reason we are facing the situation that we are in now is that we didn't get the money at the beginning of the year when we warned of the famine," he said.

The African Union held a much-delayed donor conference late last month which was shunned by most heads of state and raised $351 million, $300 million of which came from the African Development Bank to be spent over a four-year period.

Kenya, where parts of the country are facing the most severe drought in decades, is hosting a regional summit to discuss the food crisis on September 8-9.

Famine exists where at least 20 per cent of households cannot access enough food, over 30 per cent are acutely malnourished and two people per 10,000 die every day, according to the U.N.


TURKEY DONATES OVER 400 MILLION TL FOR SOMALIA
According to Ejder Kaya, Vice-Chairman of the Prime Ministry Emergency and Natural Disaster Administration (AFAD), as of yesterday 417,891,000 TL has been collected for the Somalia aid campaign. Kaya offered his gratitude to all of the charitable citizens, institutions and establishments that have stood by the comrade and brotherly Somali public.