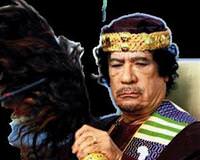 After the arrival in neighbouring Niger of dozens of Libyan vehicles, including some which may be carrying gold and cash, the United States said the convoy included aides to Gaddafi and urged authorities in Niger to hold any war crimes suspects.

Niger has denied Gaddafi is in the poor, landlocked former French colony. But a French military source has told Reuters that he and his son Saif al-Islam may have planned to rendezvous with the convoy in the Sahara, possibly via Algeria, before heading for Burkina Faso, which in the past had offered refuge.

Hisham Buhagiar, who coordinates efforts by Libya's interim government to find the ousted strongman, said he had evidence he may have been near the southern village of Ghwat, some 300 km (200 miles) north of the border with Niger, three days ago.

"The last tracks, he was in the Ghwat area. People saw the cars going in that direction," Buhagiar said in an interview late on Tuesday. "We have it from many sources that he's trying to go further south, towards Chad or Niger."

Burkina President Blaise Compaore denied discussing giving Gaddafi sanctuary. "We have no information regarding the presence of Libyans on our soil since these events, and we have had no contacts with anyone in Libya about a request for political asylum," he told reporters in the capital Ouagadougou.

Compaore has ruled for 24 years after taking power, like Gaddafi, in a military coup. And like other African states, Burkina benefited from oil-funded Libyan aid under Gaddafi.

Niger has also tried to distance itself. Officials have confirmed that Gaddafi's security chief Mansour Dhao had been let in but insisted it was a humanitarian gesture. Its interior minister denied on Tuesday a report from Niger and French military sources that 200-250 Libyan army vehicles had arrived via Algeria on Monday near the northern town of Agadez.

As with all efforts so far to find Gaddafi, two full weeks after his Tripoli headquarters were overrun by the motley collection of rebel groups who rose up in February, the trail is hazy, in a region where people are few and far between.

Buhagiar also said: "He's out of Bani Walid, I think."

He was referring to the besieged tribal bastion, 150 km (100 miles) south of Tripoli, where fighters of the National Transitional Council (NTC) have been trying to negotiate the surrender of a hard core of Gaddafi loyalists.

NTC commanders said last week they thought Gaddafi, 69, was there planning a counter-strike with Saif al-Islam, his heir apparent, and intelligence chief Abdullah al-Senussi. But it appears the senior figures are not there now, officials say.

All three are wanted by the International Criminal Court at The Hague for war crimes committed during the revolt -- though Libyans say they want to try them first, including for atrocities over the four decades before this year's uprising.

U.S. Defense Secretary Leon Panetta said he was unsure whether, as U.S. officials have said, Gaddafi was still in Libya: "I think he's been taking a lot of steps to make sure that in the end he could try to get out if he had to, but as to where, when, and how that'll take place, we just don't know."

Gaddafi's fugitive spokesman, Moussa Ibrahim, insisted in a call to Reuters on Tuesday that he had not left. "He is in Libya. He is safe, he is very healthy, in high morale."

NTC commanders have said this week they believe Ibrahim may be in Bani Walid, where a tense standoff continued. Outside the town on Wednesday, residents leaving through a sun-scorched NTC checkpoint set up around the nearby settlement of Wishtata painted an increasingly desperate picture inside Bani Walid.

"People are terrorised. There is no one in the streets," said Salah Ali, 39. "But many still support Gaddafi because they were paid by the regime, because many have committed crimes and are afraid of arrest."

Inside Bani Walid, tucked away in a valley in barren hills south of the capital, residents said Gaddafi-era green flags still wave above houses and a portrait of the "Brother Leader" in military uniform towers above its central square.

Shooting in the air and shouting insults from the back of their pick-up trucks, groups of Gaddafi loyalists regularly speed through its streets, residents said. They often shout "Allah, Muammar, Libya, nothing else!" -- the principal slogan of the old regime, especially during this year's civil war.

"I went to see my family there yesterday," said Imad Mohammed Ali, a 21-year-old supporter of the new leadership. "There is no electricity, no cooking gas, no communications. There isn't enough food. People are using coal to make fire. There is no medicine. There are no people in the streets."

Aid agencies have also raised concerns about conditions for civilians in the coastal city of Sirte, Gaddafi's birthplace and another redoubt of tribal leaders still loyal to him. Libya's southern desert is also not under the control of the NTC.