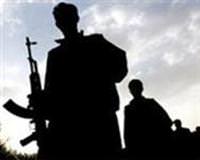 Iran said on Friday that the PJAK terrorist group killed a commander of the Revolutionary Guards during clashes in a western region of the Islamic state.

Brigadier General Abbasali Jannesari was martyred during clashes with the [The Party of Free Life of Kurdistan] PJAK terrorist group in the western parts of the country," the Fars news agency reported.

The report stated 10 Iranian troops died in the clashes while 30 PJAK terrorists were killed.

PJAK is an offshoot of the PKK, which is listed as a terrorist group by Turkey and much of the international community. In July, Iran launched a major offensive against PJAK terrorists, shelling districts near Iraq's border for weeks, but halted it during the Muslim holy month of Ramadan.

Last Monday PJAK declared a truce and called on Iran to reciprocate in order to prevent further bloodshed.

The elite Revolutionary Guards said a ceasefire declared by PJAK would be "meaningless" if the group refused to withdraw its forces from the Islamic Republic.