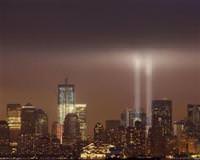 Children yearned for lost parents and grown men and women sobbed in raw grief on the brass bearing the names of nearly 3,000 dead as America commemorated the 10th anniversary of the September 11 attacks.

The name of every person killed in al Qaeda's hijacked plane attacks was read on Sunday in the nearly five-hour-long centerpiece of a heart-wrenching ceremony where the World Trade Center twin towers stood.

"I haven't stopped missing my Dad. He was awesome," said Peter Negron, a child when his father, Pete, was killed in one of the towers. "I wish my Dad had been there to teach me how to drive, ask a girl out on a date and see me graduate from high school and a hundred other things I can't even begin to name."

There were smaller ceremonies in Shanksville, Pennsylvania, and at the Pentagon, the other sites where 19 men from the Islamic militant group al Qaeda crashed hijacked airliners on the sunny Tuesday morning of September 11, 2001.

The attacks led U.S. forces to invade Afghanistan to topple the Taliban rulers who had harbored al Qaeda leader Osama bin Laden and Washington began a "war on terror" that ousted Iraq's Saddam Hussein and persists on several fronts to this day.

"Since then, we've lived in sunshine and in shadow, and although we can never unsee what happened here, we can also see that children who lost their parents have grown into young adults, grandchildren have been born and good works and public service have taken root to honor those we loved and lost."

Thousands gathered at the site on a clear morning to grieve. With security tight and no traffic, there was an eerie silence where the 110-story skyscrapers collapsed a decade ago, sending a noxious cloud over lower Manhattan.

President Barack Obama, who visited all three attack sites, read from Psalm 46 in New York: "God is our refuge and strength."

Speaking at an evening concert in Washington that closed out a day of memorial observances, Obama said much had changed for Americans in the 10 years since September 11, 2001.

"We can never get back the lives we lost on that day, or the Americans who made the ultimate sacrifice in the wars that followed," Obama said. "Yet today, it is worth remembering what has not changed. Our character as a nation has not changed."

The ceremony in New York -- with the wail of bagpipes, youthful voices singing the national anthem and firefighters holding aloft a tattered American flag retrieved from Ground Zero -- drew tears. Family members wore T-shirts with the faces of the dead, carried photos, flowers and flags in an outpouring of emotion.

For the first time, relatives saw the just-finished memorial and touched the stone where the names of their dead loved ones were etched. Some left flowers, others small teddy bears. Some used pencils to rub the names on paper, some took pictures, others leaned against the stone and cried.

The names of the dead were read by wives and husbands, fathers, mothers, sisters, brothers and children, some choked with emotion.

"May your soul finally rest in peace. Your son Nathan and I, as the years go by, grow strong. Goodbye, my dear friend, my teacher and my hero," said Candy Glazer.

Glazer's husband, Edmund Glazer, cheerfully called his wife from Flight 11 not long before he died when the plane hit the north tower -- the first of that day's horrific events.

Nicholas Gorki, 9, had these words for the father he never met, Sebastian Gorki, who died at the World Trade Center while his wife was still pregnant: "You gave me the gift of life and I wish you could be here to enjoy it with me."

The September 11 attacks claimed the lives of people from more than 90 countries. They were followed by al Qaeda bombing assaults in London, Madrid and elsewhere and brought an international campaign to ferret out their members.

"God bless every soul that we lost," said former New York City Mayor Rudolph Giuliani, who was called "America's mayor" for his leadership after the attacks.

The New York memorial includes two plazas in the shape of the footprints of the twin towers with cascading 30 foot waterfalls. Around the perimeters of pools in the center of each plaza are the names of the victims of the 2001 attacks and an earlier attack at the trade center in 1993.

Obama visited the North Memorial Pool in the footprint of the north tower. He walked around it hand-in-hand with first lady Michelle Obama, former President George W. Bush and his wife, Laura. Obama touched the etched names of the dead before he greeted some family members.

"So many names, there is barely room on the walls of the heart," said former New York Governor George Pataki, reading from the Billy Collins poem "The Names."

Police in New York and Washington were on high alert against what authorities called a "credible but unconfirmed" threat of an al Qaeda plot to attack the United States again on the 10th anniversary.

The U.S. military said it scrambled two F-16s to accompany an aircraft flying from Los Angeles to JFK airport in New York after reports of suspicious activity, and the U.S. Secret Service said it was looking into threatening messages posted on the White House's Facebook page.

At Shanksville, Obama laid a wreath where a plane crashed after passengers overwhelmed hijackers intent on piloting it into the White House or U.S. Capitol. Chants of "USA, USA" broke out from the crowd, gathered at the foot of a grassy hill. The Obamas talked with family members. "Thank you for keeping us safe," one man called out to the president.

Later at the Pentagon, Obama placed a wreath of white flowers at the memorial, which says "September 11, 2001 9:37 AM" to mark the time the plane struck the U.S. military's headquarters.

In the Adriatic city of Ancona, Italy, Pope Benedict prayed for September 11 victims and appealed to those with grievances to "always reject violence."

In May, nearly a decade after September 11, U.S. forces killed al Qaeda founder bin Laden at his hide-out in Pakistan. The 2001 attacks prompted wars in Iraq and Afghanistan, where the Pentagon still has a large number of troops and where violence persists.

"The 9/11 attacks were the beginning of a long winter in world history," NATO Secretary-General Anders Fogh Rasmussen said in Brussels. "But events in the Middle East have renewed our faith that although the desire for freedom can be repressed, it can never be extinguished. The Arab spring is a new season of hope for us all."

After a faltering start at rebuilding, the new One World Trade Center is now more than 80 stories above the ground as it rises to its planned 1,776-foot height -- symbolic of the year of America's independence from Britain.

For many -- particularly the more than 1,100 families who received no remains of their dead -- Sunday was the closest they came to a funeral for their loved ones. With the memorial complete, it offered for the first time something resembling a final resting place and a formal place to mourn.

"When we came out here 10 years ago there was a hole in the earth and that's how we felt," said Dakota Hale, 25, of Denver, who lost his stepfather, flight attendant Alfred Marchand.