Blast at French nuclear site kills one, no leaks 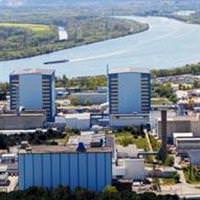 An explosion in a furnace at the Marcoule nuclear waste treatment site in southern France on Monday killed one person, but there was no leak of radioactive material outside the site, officials said.

Four people were injured, one with serious burns, in the blast at the Centraco site, owned by French power utility EDF and adjacent to the Marcoule nuclear research centre. The Centraco site does not house any nuclear reactors.

Fatalities in accidents at active nuclear sites in France are extremely rare, although deaths occasionally occur during plant construction.

Monday's blast comes amid heightened safety concerns in the wake of Japan's Fukushima disaster in March.

The U.N. nuclear watchdog, the International Atomic Energy Agency, said it was seeking information from France about the explosion and had activated its incident and emergency centre.

France's ASN nuclear safety watchdog said it was launching an inquiry into the cause of the explosion at 13:06 p.m. that hit shares in EDF, France's main power utility.

EDF said the blast was contained within the furnace, which is used to melt waste with levels of radioactivity ranging from low to very low.

"There was an explosion at the site of Marcoule at 13:06 p.m. causing one death and four injured," an EDF spokeswoman said. "We don't know the cause," she added.

Local emergency services said there were no traces of radioactivity on the four people injured.

"The risk of fire is over and there is no radioactive or chemical contamination of either the interior or exterior of the site," a rescue worker said.

Police also said there was no contamination outside the Centraco complex, in operation since 1999.

The Centraco site is next to the town of Codolet in the Gard region, about 30 km (18 miles) from the city of Avignon and about 80 km from the Mediterranean coast.

The complex, employing some 350 people, processes scrap metal such as valves and pumps used in nuclear plant operations in a melting plant and also burns combustible waste in an incinerating plant, according to Centraco's website.

France -- the world's most nuclear-reliant country -- is carrying out stress tests on its 58 nuclear reactors in the aftermath of the Fukushima disaster when the Japanese nuclear site was damaged in an earthquake and tsunami.

In its 2010 annual report, the ASN says that in 2008 it identified some weak spots in the Centraco site, operated by EDF subsidiary Socodei, that prompted it to ask Centraco to put forward an action plan to improve safety. It said the situation had improved since then at the site.

Malcolm Sperrin, director of Medical Physics and Clinical Engineering at the Royal Berkshire Hospital in Reading, England said: "The French authorities are highly competent at disaster management and also in the implementation of safe practice in all industrial environments.

"It is unlikely that there will be significant, or any, releases of radiation into the wider environment but this will need to be confirmed in the next few hours or days."