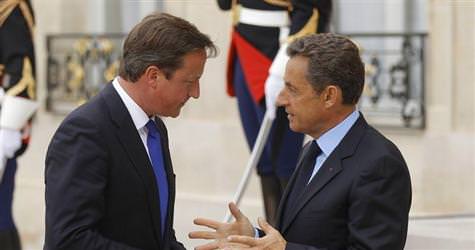 British Prime Minister David Cameron and French President Nicolas Sarkozy will travel to Libya on Thursday, when Tayyip Erdoğan will also be in the country, in what would be the first visits by foreign heads of state since the overthrow of Muammar Gaddafi, the interim government said.

The visit would give Cameron and Sarkozy, who pushed Western powers to help Libyan rebels in their uprising against Gaddafi, a chance to tout the success of a NATO air campaign in which their armed forces played a key part. For Erdoğan the Libya stop is a part of his 'Arab Spring' which began in Egypt.
"They are coming tomorrow. First to Tripoli and then to Benghazi," NTC vice chairman and official spokesman, Abdel Hafiz Ghoga told Reuters.
The leaders will meet chairman of the ruling National Transitional Council, Mustafa Abdel Jalil, in Tripoli before travelling to Benghazi, the cradle of the uprising, NTC sources told Reuters.
Neither Downing Street or the Elysee presidential palace have confirmed the surprise visit.
Turkish Prime Minister Tayyip Erdoğan is also scheduled to visit Libya on Thursday as part of a North African tour. Egypt's foreign minister Mohamed Kamel Amr is also expected in Tripoli.