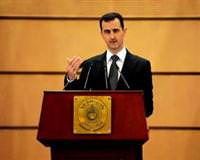 At least four villagers were killed by security forces and armed men loyal to Assad who fired machineguns randomly as they swept into at least 10 villages and towns in Jabal al-Zawiya from a nearby highway, after blocking access to the region and cutting off communications, the activists said.

"This is an initial death toll. Communication with the region is very difficult," one activist said.

A protest demanding the removal of Assad broke out nevertheless in al-Janoudiya, a village in Jabal al-Zawiya, and a boy among the marchers was killed by troops who fired at the crowd, the Syrian Revolution General Commission, a grassroots activists' organization, said.

The Syrian Observatory for Human Rights, which is based in Britain, said at least 100 people were arrested in the campaign, including eight members of the family of Colonel Riyad al-Asa'ad, a defector, in collective punishment that has been applied regularly against the families of high ranking deserters and their hometowns.

Assad faces Western outrage and tougher rhetoric from Turkey but no U.N. Security Council action over a ferocious military campaign to stop a six-month uprising demanding political freedoms and an end to his family's autocratic rule.

Support from Russia and China, which have oil concessions in Syria and want to limit the spread of Western influence in the Middle East, have helped frustrate a Western-led U.N. resolution for sanctions on Assad and the ruling hierarchy.

International rights groups, Western and Arab diplomats and local activists cite many more mass arrests in the last two weeks, including of wounded protesters in hospitals, more assassinations of street protest leaders, as well as more activists being reported tortured to death in prison.

Syrian authorities rarely comment on specific killings, but they have denied reports of suspected torture in the past and said arrests are only made in accordance with the constitution.

In the northwest, the assault in Jabal al-Zawiya followed a major sweep this week on al-Ghab Plain, farmland to its south that has seen regular protests and serves as a supply line for army deserters.

At least 26 villagers have been killed by troops in the last 72 hours in al-Ghab, local activists said.

Most of the deserters, who are estimated to number in the hundreds, are from the Sunni Muslim rank and file, which is dominated by an officer corps from Syria's minority Alawite sect, to which Assad and the ruling hierarchy belong.

Lacking an organized command and access to weapons to match Assad's core forces, many of the deserters have tried to flee to Turkey, residents and local activists say.

Turkey has kept the border open with Syria and has not stopped thousands of refugees who have crossed into its territory to escape the intensifying military assaults on numerous villages and towns in the northwest.

Turkish Prime Minister Tayyip Erdogan has urged Assad repeatedly to end his crackdown on dissent but stopped short of echoing the United States and European Union in calling for Assad's resignation.

The EU has imposed an embargo on Syria's oil sector, possibly cutting off a major source of cash for Assad.

An adviser to Assad, on a visit to Moscow this week, said reports of mass civilian killings have been exaggerated by the media and that the only casualties were 700 soldiers and policemen killed by "terrorist groups" and a similar number of what she described as mutineers.

A statement by 176 groups, including New York-based Human Rights Watch, said the Arab League should support UN Security Council travel bans and freezing of assets, as well as enforce its own arms embargo.

"Citizens of the Arab world share the desire to see an end to the bloodshed in Syria and to see the Arab League act as the leading regional organization to protect and uphold the common values of the Arab world at this critical and historical moment," they said in a letter to Arab League Secretary-General Nabil Elaraby.