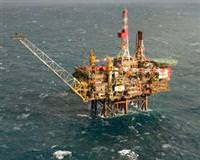 Turkey said on Thursday it would sign a pact with Turkish Cypriots setting out the maritime boundaries of the breakaway state on divided Cyprus if rival Greek Cypriots press ahead with plans to launch offshore gas drilling.

Turkey, the only country to recognise a Turkish Cypriot state in northern Cyprus, has taken a direct role in an escalating row over hydrocarbon reserves in the eastern Mediterranean, saying any reserves around the island belong not only to Greek Cypriots but also Turkish Cypriots.

The internationally recognised Republic of Cyprus has said it will pursue gas exploration and has warned it will block Turkey's EU-entry talks as long as Ankara challenges its rights to energy reserves.

"It has been agreed that Turkey and the Turkish Republic of Northern Cyprus will conclude a continental shelf delimitation agreement should the Greek Cypriot Administration proceed with offshore drilling activities in the south of the Island," Turkey's foreign ministry said in a statement.

It did not elaborate on what that agreement would entail but said it had decided on the measure at a meeting in Turkey between Turkish and Turkish Cypriot officials. It said further meetings would take place in northern Cyprus on Friday.

Defining such an area could allow the respective jurisdictions to claim areas for future exploration and exploitation.

Turkey's NATO partner Greece, a close ally of the Greek Cypriots, said the proposed deal conflicted with international law. "Any such 'agreement' will be null and void," a Greek Foreign Ministry spokesman said. "It cannot in any way be associated with the self-evident sovereign right of the Republic of Cyprus to move forward and utilise its natural resources," the spokesman said.

According to a U.N. convention on maritime law, continental shelf delimitation refers to a coastal country's territorial boundaries beyond its territorial sea but those boundaries are subject to a series of complex clauses.

The 1982 U.N. Convention on the Law of the Sea (UNCLOS) establishes guidelines for businesses, the environment, and the management of natural resources within oceans. But while Cyprus and Lebanon have signed and ratified UNCLOS, neither Turkey nor Israel have officially endorsed the treaty.

Energy analyst Necdet Pamir said Turkey's statement was aimed at bullying Greek Cypriots into giving up its plans by threatening to begin its own oil explorations in the contested region.

"With this agreement they are saying to the Cypriot administration, and behind them, to Greece: 'If you start drilling explorations, then we together with northern Cyprus will make an agreement on continental shelf delimitation'," Pamir said.

"Meaning we will also carry out explorations in the area south of Turkey and north of the northern part of Cyprus and likewise this won't concern the Cypriot administration."

But Pamir said that unless Turkey was prepared to use its navy to enforce its objection, then the Greek Cypriot government would not be deterred and "can carry on as if it was now also legally acceptable".

The dispute comes at a sensitive time in the region particularly after a breakdown in relations between Turkey and Israel, and the feud has complicated peace talks launched between the Greek and Turkish Cypriot sides in 2008.

Rhetoric over ownership of the potential oil and gas deposits had already sharpened after Turkish Prime Minister Tayyip Erdogan questioned the validity of oil drilling contracts granted by the Greek Cypriots, prompting a rebuke from the EU.

Texas-based Noble Energy , under licence from the Greek Cypriot government, is expected to start exploration work in one offshore sector southeast of the island around the beginning of October. Tenders for other offshore blocks are expected later this year or in 2012.

The U.S. Geological Survey last year estimated a mean of 1.7 billion barrels of recoverable oil and a mean of 122 trillion cubic feet of recoverable gas in the Levant Basin Province, although disputes over control have held back exploration.