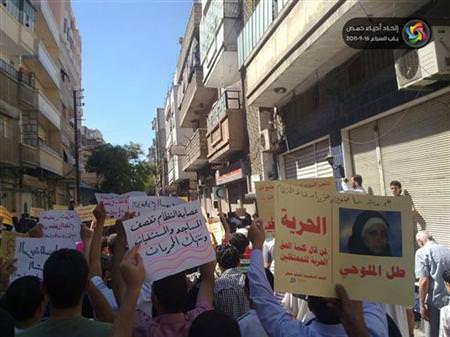 Syrian forces killed seven civilians on Tuesday in raids near Damascus and in Homs province, activists said, both centres of an uprising against the rule of President Bashar al-Assad.

In a separate incident, troops defused a bomb planted under a crude oil pipeline near the city of Homs, state news agency SANA said.

President Assad has responded to six months of unrest with a military crackdown in which the United Nations says 2,700 people have died, including 100 children.

Tens of thousands of people have also been arrested, activists say, and French Foreign Minister Alain Juppe said on Monday Syrian leaders would have to answer for crimes against humanity that he said were being committed in Syria.

U.S. President Barack Obama and Turkish Prime Minister Tayyip Erdogan agreed on Tuesday on the need to increase pressure on Assad to stop the crackdown, the White House said.

Assad, who succeeded his father 11 years ago, has said he is resisting a foreign conspiracy to divide Syria and the use of force has been limited.

Most of Monday's killings occurred in the city of Homs, 165 km (100 miles) north of Damascus, and in the surrounding countryside, residents and activists told Reuters.

Locals say the military has stepped up operations in the area in recent weeks after an increasing number of army defections.

"Defections have not reached a level that threatens Assad, but he cannot rely on most of the army. Otherwise he would not have had to use the same loyalist core troops again and again to crush protests and move them from one city to another," a European diplomat said.

"It is clear that the security solution he has chosen is losing him support by the day from the Sunni majority," the diplomat said.

Most of the army's rank and file soldiers are Sunni Muslims, but they are largely commanded by officers from Assad's minority Alawite sect.

Defecting soldiers in the town of Rastan, 20 km north of Homs, this month announced the formation of a battalion called "Khaled bin al-Walid," after an Arab Muslim commander who conquered Syria.

Troops killed a woman and a boy in Rastan on Tuesday and fired machineguns late into the night, said the Syrian Observatory for Human Rights, which is based in Britain.

Police killed two people in Kiswa, a town just south of Damascus, said a posting on Facebook, purporting to come from town residents.

Officers fired rifles from rooftops and patrolled streets with pickup trucks armed with machineguns, firing randomly, while houses were raided, the posting said.

A resident of Homs, who gave his name as Fares, said more barricades and checkpoints manned by troops and gunmen loyal to Assad had been set up in densely populated central districts on the outskirts of the city in the last 24 hours.

That followed large demonstrations on Monday and fighting between army defectors and Assad loyalists in the countryside, during which two deserters were killed.

Other killings were reported in Homs and surrounding rural areas.

In the northwestern Jabal al-Zawiya, a region near Turkey where army defectors had also taken refuge, a policeman was shot dead by unidentified gunmen, the Syrian Observatory for Human Rights said.

State news agency SANA said a member of the security forces was shot dead by an "armed terrorist group" in Homs. It said three others were wounded.

Despite their resilience in the face of Assad's crackdown, Syria's opposition movement has struggled to close ranks and create a unified platform for protesters.

But last week opposition figures meeting in Istanbul took a major step towards bridging their differences when they announced the formation of a Syrian National Council.

That body won the important backing on Tuesday of the Local Coordination Committees, a grassroots activist group at the centre of the protest movement. "We support the SNC out of our commitment to unify the opposition and to eliminate the opposition's fragmentation," the LCC said.

Activists and diplomats say protests in Syria have been overwhelmingly peaceful, but there have been increasing reports of attacks on security forces by gunmen and clashes with army deserters.

Authorities say 700 soldiers and police have been killed, and the same number of "mutineers."

SANA said army engineering units dismantled a bomb containing 25 kg of explosive which had been placed under a pipeline delivering crude oil to Homs refinery.