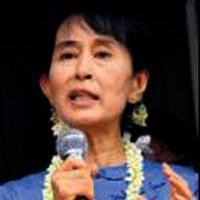 A leading British foreign policy think-tank said on Friday it had chosen Myanmar democracy campaigner Aung San Suu Kyi as the winner of its prestigious prize this year.

The Royal Institute of International Affairs awards its Chatham House Prize annually to the person its members believe has made the most significant contribution to the improvement of international relations in the previous year.

It said Suu Kyi, a Nobel peace laureate, had become an international symbol of democracy and peaceful resistance, having spent most of the last two decades in some form of detention because of her efforts to bring democracy to Myanmar (formerly called Burma).

Former U.S. Secretary of State Madeleine Albright will accept the prize on Suu Kyi's behalf at a ceremony in London on December 1.

Suu Kyi, 66, whose British husband Michael Aris died in 1999, has always refused to leave Myanmar for fear of not being allowed back.

"International awareness helps our struggle for democracy in Burma, and our struggle provides us with an insight into the yearnings of all peoples for peace and freedom," Suu Kyi said in a statement released by the think-tank.

Suu Kyi was released last November from 15 years of house arrest for campaigning for democracy in Myanmar, which has been under military rule for five decades.

As a gesture to improved ties from the army-backed government that came to power in March, President Thein Sein and Labour Minister Aung Kyi recently met with Suu Kyi, the leader of the country's democratic opposition.

Speaking by video link to a conference in New York on Wednesday, Suu Kyi said she was hopeful of seeing signs of change "very soon" in her country.