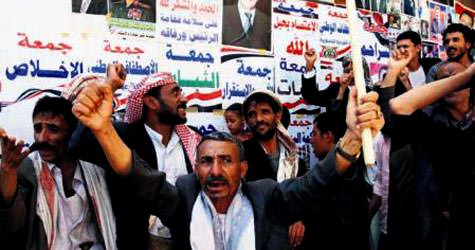 President Ali Abdullah Saleh's forces attacked the main opposition protest camp in Sanaa on Saturday, killing one person hours after the Yemeni leader returned to the country from a three-month absence, protesters and medical staff said.

"We're in trouble ... We have six severely injured and one killed in a terrible way by the mortar fire -- we only have half a body," doctor Mohammed al-Qubati said at a mosque-turned-field hospital.

Protesters in the 4-km stretch of avenue that they have dubbed "Change Square" said tents in the opposition encampment were on fire and that there had also been sniper attacks.

Saleh said on his return to Yemen on Friday that he wanted to see a truce to end days of heavy fighting in the capital, but opponents said they feared more bloodshed and the United States demanded he relinquish power.

"I return to the nation carrying the dove of peace and the olive branch," Saleh was quoted as saying by state television.

Saleh, who went to neighboring Saudi Arabia for medical treatment in June when he suffered severe burns in an assassination attempt, said a ceasefire would enable peace talks to take place.

His reappearance raised big questions over the future of the fractious Arabian Peninsula state, which has been paralyzed by protests against his 33-year rule since January.

In Washington, White House spokesman Jay Carney said: "We urge President Saleh to initiate a full transfer of power and arrange for presidential elections to be held before the end of then year.

"The Yemeni people have suffered enough and deserve a path toward a better future."

In Sanaa this week, a months-old standoff between loyalist troops and forces backing anti-Saleh protesters erupted into a full-blown battle that killed more than 100 people in five days.

Yemen, one of the region's poorest, also faces a worsening insurgency by al Qaeda militants, an uneasy truce with Shi'ite fighters in the north and separatism in the south.

Opponents saw his return as an attempt to rally for war and said they expected more bloodshed, while his supporters reacted with joy and said he could restore order.

"I'm so excited," said Akram al-Aghbari, a doorman. "He is an honorable and great man. I know he's coming to stop this terrible violence. People here without him only know how to rule with weapons, but with him back, just you watch."

Abdulghani al-Iryani, a political analyst and co-founder of the Democratic Awakening Movement, said violence lay ahead.

"This is an ominous sign. Returning at a time like this probably signals he intends to use violence to resolve this. This is dangerous," said Iryani.

"His people will feel that they are in a stronger position and they will refuse to compromise. Basically this means the political process is dead in the water."

Many Yemenis thought they had seen the last of Saleh when he flew to Saudi Arabia in June for medical treatment after a bomb explosion at his palace left him with severe burns.

Saleh had been involved in negotiations mediated by Gulf states to leave office, repeatedly promising to step down only to change his position at the last minute.

The United States said on Friday it wanted Saleh to sign the accord promoted by the Gulf Cooperation Council.

"This initiative remains effective and Hadi will continue the dialogue to create a binding mechanism to implement the Gulf initiative," Yasser al-Yamani told al Jazeera television.

The Gulf initiative envisages Saleh standing down three months after signing it. He agreed three times to earlier drafts of the deal only to back out at the very last minute.

Regional power Saudi Arabia, which shares a porous 1,460 km border with Yemen, has been a key player in Yemen for decades, offering support to Saleh's government to keep al Qaeda at bay and spearheading regional talks on a power transfer.

Some analysts say Saudi Arabia might not have let Saleh return unless a deal is likely.

"I'm sure he talked of his return with (Saudi Arabia's) King Abdullah during their meeting (on Monday night)," said Ghanem Nuseibeh, an analyst and partner at Cornerstone Global consultants in London.

"The Saudis would want that if he goes, then any transition of power is in their interests and doesn't bring about an anti-Saudi government. If there wasn't anything for them they wouldn't have let him go."

Gulf Cooperation Council Secretary General Abdbullatif al-Zayani flew to Sanaa this week to try and resurrect the deal but left after two days with nothing to show for his efforts.