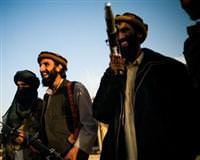 An Afghan employee of the U.S. government opened fire inside a CIA office in Kabul on Sunday evening, killing an American and injuring a second, U.S. and Afghan officials said, in the second major breach of embassy security in two weeks.

The killing adds to a sense of insecurity already heightened by a 20 hour-siege of the embassy district in mid-September, and the assassination a week later of the government's peace envoy, former President Burhanuddin Rabbani.

The CIA compound is one of the most heavily guarded in Kabul, and has been off-limits for almost a decade, since shortly after the Taliban's fall from power in 2001.

It also lies at the heart of the capital's heavily-guarded military, political and diplomatic district, a virtual "green zone" that is almost impossible for ordinary Afghans to enter.

It was not clear if the U.S. citizens were victims of a rogue employee who had been won over to the insurgent cause, or just the escalation of an argument in a city were tensions are high and many people carry guns. There are precedents for both.

The "lone attacker" was killed, and the injured U.S. citizen was taken to a military hospital , U.S. embassy spokesman Gavin Sundwall said on Monday.

"There was a shooting incident at an annex of the U.S. embassy in Kabul last night involving an Afghan employee who was killed. The motivation for the attack is still under investigation at this time," Sundwall said.

The shooting follows a string of attacks by Afghan security forces against their NATO-led mentors carried out either by "rogue" soldiers and police or by insurgents who have infiltrated security forces.

The Taliban could not immediately be reached for comment.

Waheed Mujhda of the Afghan Analytical and Advisory Center in Kabul, said the incident characterized the level of mistrust between the United States and its Afghan allies.

"It's not the first time this has happened and it won't be the last, he said.

"This is a big security concern for the Americans and it shows they can't fully trust their Afghan staff. But the Americans never want to accept that there are serious trust and cooperation issues and they have encountered that in their security operations with Afghan forces."

The CIA suffered one of the deadliest attacks in its history on an Afghan base at the end of 2009, when a would-be informant blew himself up, killing seven CIA officers.

Sunday's shooting came the same month that insurgents took over an unfinished high-rise near the city's heavily guarded military, political and diplomatic heart and showered rockets down on the U.S. embassy and NATO headquarters.

That attack lasted 20 hours, and the U.S. has blamed it on the Haqqani network of militants, who were long based in Pakistan's lawless frontier regions although they now say they have moved back into Afghanistan.

The CIA office is located at the Ariana hotel, just a few blocks away from the Presidential Palace and the U.S. embassy, and used by the CIA as a Kabul base.

Kabul Police Chief Ayub Salangi said there had been an exchange of fire at the hotel, which he described as an "office" for the CIA, but declined further comment on what happened in an area where access is restricted even for Afghan forces.

The hotel has been closed off and heavily guarded at least since the fall of the Taliban government in late 2001. Perhaps because of its proximity to the Presidential Palace, it was used by ruling regimes for years before that.