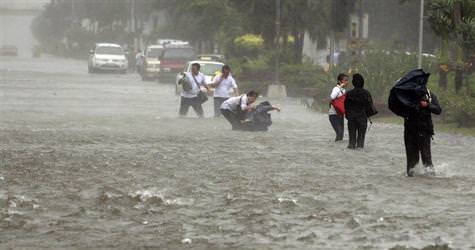 Typhoon Nesat pounded the Philippines' main island on Tuesday, lashing crop-growing provinces and bringing the capital to a near standstill as it flooded roads, cut power supplies and closed financial markets, government offices, transport and schools.

At least seven people, including a 22-month-old boy, died in the storm, with four missing, the disaster agency said.

Nesat was a category 3 typhoon with winds of around 200 km per hour (125 mph) when it hit the northern provinces of Luzon island just before dawn on Tuesday, Tropical Storm Risk said.

It lost some strength as it moved west northwest across Luzon at about 20 kph, and the centre was expected to clear the northwest coast later on Tuesday, although rains and winds would linger.

"We cannot give any estimate of damage at the moment because the typhoon is still battering many provinces," said Benito Ramos, head of the national disaster agency.

Large portions of the capital Manila, a city of 13 million, were without power. Officials shut some rail networks as a precaution after high winds cut power lines and toppled electric posts. A number of flights were also cancelled.

"This is only a temporary shut-off, so that there will be no accidents, no short circuit, because if electric posts are toppled, there might be short circuits," Ramos said earlier.

Strong winds uprooted trees and tore off some billboards along major roads. Debris blocked roads in the capital and provinces, and officials warned of the risk of landslides from heavy rains in mountainous regions.

The waters of Manila Bay overflowed onto Roxas Boulevard, flooding streets and parks around the U.S. embassy, central bank and finance department, with the water waist deep in parts. A radio report said the upmarket Sofitel hotel in the area was partly flooded, with buses brought in to move guests.

Manila residents in low-lying areas waded through floods to seek higher ground and evacuation centers. Winds tore the tin roof from a gymnasium used as an evacuation centre in the poor, crowded Tondo district in the capital, sending evacuees scampering for new shelter.

Residents were also evacuated as the Marikina River in metro Manila rose to 18 metres, and water was being released from dams near the capital as they neared overflowing levels.

"The waters are swelling more and more. Since it started raining yesterday, the floods just went up higher and higher. It's not subsiding," said school official Evelyn de Guzman, who was working at an evacuation centre near the river.

Nesat, with a diameter of 650 km, dumped heavy rains on rice and corn growing regions in central Luzon, with nearly all of the provinces on the main island under a typhoon alert.

The weather bureau said the typhoon, known locally as Pedring, was dropping 15-25 mm of rain an hour.

Faustino Dy, governor of Isabela province where Nesat made landfall, told national radio that 15 to 20 percent of rice crops in the province may be damaged by the typhoon.

The Department of Agriculture said it may be able give a preliminary assessment of crop damage on Wednesday.

The Cagayan Valley region, which includes Isabela, was projected to account for 8.4 percent of the national third quarter rice crop and 10.5 percent of fourth quarter output.

There was no stock, bond or currency trading due to a lack of clearing facilities, with government offices and the central bank closed, and a Treasury bond auction was rescheduled for Wednesday.

On Monday, authorities ordered the evacuation of more than 100,000 people in central provinces, warning Nesat could cause landslides, flash floods and storm surges in coastal areas.