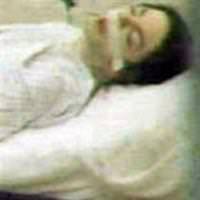 Images of Michael Jackson lying dead in a hospital and rehearsing the day before his death, along with recollections of the singer as a troubled "lost boy," made for a heart-wrenching opening on Tuesday to the manslaughter trial of the doctor hired to care for him.

"That misplaced trust in the hands of Conrad Murray cost Michael Jackson his life," Walgren said.

But Murray's lawyers argued Jackson "caused his own death" by giving himself extra medication in a bid to sleep. "He died so rapidly, so instantly, he didn't even have time to close his eyes," defense attorney Ed Chernoff said in opening arguments.

Murray denies he is guilty of the involuntary manslaughter of Jackson on June 25, 2009, but admits giving the 50-year-old pop star a dose of the powerful anesthetic propofol as a sleep aid. He faces a prison sentence of up to four years if convicted. The trial is expected to last four to six weeks.

The Texas cardiologist, who was paid $150,000 a month to care for Jackson, wiped away tears during Tuesday's opening statements as Chernoff defended him.

Jackson's lifeless body was found at his rented Los Angeles mansion just three weeks before a series of 50 planned London comeback concerts titled "This Is It" were scheduled to begin.

Kenny Ortega, the co-director of the concerts, testified that Jackson was excited about the shows because he wanted his young children to see him perform.

But on June 19, six days before his death, Jackson turned up at rehearsals in Los Angeles in a worried state. "Michael seemed chilled, lost and incoherent," Ortega recalled.

"I was feeding him, wrapping him in blankets to warm his chills, massaging his feet to calm him and calling his doctor," Ortega wrote in an email to concert promoters hours later. "It broke my heart. He was like a lost boy ... He is terribly frightened it is all going to go away," Ortega put in the email.

Four days later, Jackson was back "full of energy, full of desire to work, full of enthusiasm," Ortega said. Ortega hugged Jackson goodbye after another good day of rehearsals on June 24. On June 25, the director and choreographer said he got a call saying "We lost him."

He argued that a frustrated Jackson, tired and under pressure to get the concerts ready, gave himself eight lorazepam anti-anxiety pills to sleep in the early hours of June 25. When he still could not rest, he added propofol.

"We believe the evidence will show... that when Dr. Murray left the room, Michael Jackson self-administered a dose of propofol that with the lorazepam created a perfect storm within his body that killed him instantly," Chernoff added.

"The whole thing is tragic, but the evidence is not that Dr Murray did it," Chernoff said.

Walgren opened the prosecution case by showing jurors a photo of a thin Jackson lying dead on a hospital gurney. He later played video of Jackson's last performance -- an emotional rehearsal of "Earth Song" filmed on June 24, 2009.

Footage of the rehearsals was made into Jackson's posthumous concert movie "This Is It" in 2009 and it became a global box office hit.

Jackson's parents, Joe and Katherine, his sisters, Janet and La Toya, and other family members were in court on Tuesday, while outside dozens of fans outside the courtroom held sunflowers, pictures of the dead pop star, and placards saying "Justice for Michael."