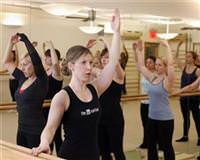 Middle-aged women encouraged to exercise at moderate intensity were much happier and more likely to continue working out than peers who exercised more intensely, according to a study.

Researchers led by Steriani Elavsky of Penn State University in Pennsylvania recruited 255 women between 40 and 60 years old to do either moderate or vigorous exercise, then followed the volunteers to monitor their reactions.

Overall, women who did moderate exercise were about twice as likely to feel energized and confident they could do more exercise in the future, and more of them also showed decreased feelings of sadness and anxiety than the vigorous-exercise group.

"Exercise makes you feel better but it is going to be more pleasant when performed at moderate intensity as compared to vigorous, especially when you have been previously inactive or may be overweight," Elavsky told Reuters Health.

They were activities "that would allow you to talk in short sentences while you are doing them, but would not allow you to sing," she added.

Middle-aged women are among the least active and their level of physical activity declines with age. Understanding whether exercise of different intensities has different effects on mood and whether these predict overall physical activity in midlife women is an important question to address, Elavsky added.

Elavsky and colleagues at the Middle East Technical University in Ankara, Turkey studied the 255 women, who were not on hormone therapy and who kept a daily diary of activities and feelings for two weeks. She presented their findings at the North American Menopause Society meeting in Washington D.C.

At the beginning of the study, the women completed two bouts of moderate or vigorous exercise. The vigorous workout involved exercising on a treadmill to the point where they could no longer tolerate the intensity, and moderate exercise involved a 30-minute session, also on a treadmill, at a pace the women selected for themselves but could be considered moderate.

All women also wore an accelerometer, a small device the size of a match box, to track their energy expenditure and their time spent in activities of different intensities.

The study found that moderate intensity exercise caused more women to report later that they were in a better mood and to have greater feelings of energy, psychological wellbeing and "self-efficacy."

Moderate physical activity was also much better in these terms for obese and out of shape women, Elavsky said.

Vigorous exercisers showed smaller benefits to mood, and those who were overweight or had symptoms of illness reported "significant decreases in calmness" after the exercise bouts.

Elavsky added she hopes her study will reaffirm to women that exercise can be a powerful way to enhance their wellbeing, and that they don't have to go all out with their level of exertion.

"The effects we observed were large and moderate intensity is sufficient, in fact it is optimal," she said.

"We also hope that clinicians will realize the importance of considering the proper exercise intensity when making recommendations about exercise."