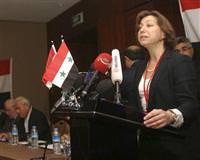 A statement issued in Istanbul on behalf of the newly formed National Council rejected foreign intervention that "compromises Syria's sovereignty" but said the outside world had a humanitarian obligation to protect the Syrian people.

"The Council demands international governments and organizations meet their responsibility to support the Syrian people, protect them and stop the crimes and gross human rights violations being committed by the illegitimate current regime," the statement said.

The declaration and support for the National Council was a significant show of unity from the Syrian opposition after six months of mostly non-violent protests against President Bashar al-Assad have begun to be overtaken by more violent resistance.

Armed insurgents, mostly in the central Homs region and in the northwestern province of Idlib near Turkey, have been so far outgunned.

The official Syrian news agency said Saturday government forces had regained control of the central town of Rastan, after the most prolonged fighting yet between the army and insurgents who are led, according to residents, by army defectors.

But underlining the more violent turn, Syrian authorities said that the son of Syria's Mufti, who is appointed by Assad, was assassinated Sunday. It was the first attack against the state-backed Sunni clergy who have been a base of support for Assad's ruling Alawite elite for decades.

In Istanbul, the National Council said that the uprising must remain peaceful but that military assaults on numerous towns and villages, torture and mass arrests were driving Syria "to the edge of civil war and inviting foreign interference."

It also said the Muslim Brotherhood, the Damascus Declaration - the main grouping of established opposition figures - and grassroots activists all had joined the National Council.
While few expect a Libya-style intervention in Syria, the declaration was nonetheless a way for the opposition to shake off its image of in-fighting and lack of cohesive leadership.

"The fact that Islamists, secular figures and activists on the ground are now on one council is a significant," a diplomat in the Syrian capital Damascus said.

"But they still have to demonstrate that they could be politically savvy and able to fill any political vacuum. They need a detailed action plan beyond the generalities of wanting a democratic Syria."

The United Nations says 2,700 people, including 100 children, have been killed in six months of protests against Assad, whose Alawite minority sect - a Shi'ite offshoot - dominates the mostly Sunni Muslim country of 20 million.

The 46-year old president, who inherited power from his father in 2000, blames the violence on armed gangs backed by foreign forces, while his officials say 700 police and soldiers have been killed, as well as 700 "mutineers."

The government has dismissed the opposition organizing outside Syria as a foreign conspiracy to sow sectarian strife.

The state news agency said "armed terrorist groups" killed five members of the security police in the Ghab region west of the city of Hama and used explosives to derail a freight train in the province of Idlib Sunday.

It also said that Sariya Hassoun, the son of Mufti Ahmad Hassaoun, who is officially considered the highest religious authority in Syria, was assassinated in Idlib.
Idlib, together with the central region around the town of Rastan on the Orontes River, 110 miles north of Damascus, have seen some of the biggest protests against Assad, followed by a fierce crackdown and fighting between loyalist forces and defectors and other insurgents.

The two regions are a main reservoir of Sunni recruits to the military, which is led by mostly Alawite officers.

Local activists said troops backed by tanks raided villages and towns looking for army defectors around Rastan Sunday, with tens of villagers arrested in the Houla and Talbiseh region, and the villages of al-Zafaran and Deir al-Foul.

One activist said security forces killed three civilians on Sunday in the town of Khan Sheikhoun north of Rastan. He said that among them was activist Mohammad Tellawi, 35, whose brother Mukhles was also killed three months ago.

The Istanbul declaration was read out by Bourhan Ghalioun, a secular professor of politics living in France. He was flanked by Islamists, including Muslim Brotherhood leader Mohammad Riad al-Shaqfa, Christian and Kurdish politicians and Samir Nashar, a member of the Damascus Declaration.

Among those represented in the Damascus Declaration are former parliamentarian Riad Seif, seen as possibly playing a leadership role if Assad were to fall, and Riad al-Turk, Syria's top dissident.

Turk, 81, but still operating underground, has moral authority over the diverse opposition, having spent 25 years in jail as a political prisoner, including almost 18 in solitary confinement.

France has already publicly supported the National Council, but it has not yet won endorsement from the United States or Syria's powerful neighbor Turkey, which has been enraged by what it describes as brutal killings south of its border.
Assad has relied on Russia and China, which have major oil concessions in Syria and do not want to see Western influence in the Middle East spread, to block western proposals for United Nations Security Council sanctions on Damascus.

The European members of the Security Council have been working in recent days to persuade Russia to accept a watered-down resolution on Syria that would threaten "targeted measures" against Damascus if it fails to end its crackdown on pro-democracy demonstrators without explicitly threatening U.N. sanctions, Council diplomats said.

European envoys say that they hope the Council will vote on the Syria resolution Tuesday.