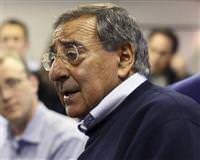 Defense Secretary Leon Panetta warned on Sunday that Israel is becoming increasingly isolated in the Middle East and said U.S. security commitments should enable it to take "risks for peace."

Panetta, who arrives in Israel on Monday for the first time since becoming Pentagon chief, said he would reaffirm U.S. security commitments to Israel and try to help it improve its increasingly chilly relations with Turkey and Egypt.

"It's pretty clear, at this dramatic time in the Middle East when there have been so many changes, that it is not a good situation for Israel to become increasingly isolated. And that is what has happened," Panetta told reporters on his plane.

Panetta's visit to the Middle East, which includes meetings with Palestinian and Egyptian leaders, comes at a time when Arab popular demand for political change has buffeted the region, raising hopes, tensions and uncertainty.

Protests toppled governments in Tunisia and longtime U.S. ally Egypt earlier this year and touched off a civil war in Libya that led to the ouster of leader Muammar Gaddafi.

But the changes have sometimes been unsettling.

Egyptian protesters invaded the Israeli Embassy in Cairo a month ago in anger over a clash that killed five border guards. The military government's handling of that incident and comments afterward raised concerns about Cairo's future commitment to its peace deal with Israel,

"The timing (of Panetta's visit) couldn't be more apt given the events unfolding in the region and broad range of important issues on the agenda with the Israelis and the Egyptians," a senior defense official said, speaking on condition of anonymity.

"The important thing there is to again reaffirm our strong security relationship with Israel, to make clear that we will protect their qualitative military edge," Panetta said. "As they take risks for peace, we will be able to provide the security that they will need in order to ensure that they can have the room hopefully to negotiate."

Panetta said he was confident Israel had maintained its military superiority in the region "but the question you have to ask is - is it enough to maintain an military edge if you are isolating yourself diplomatically?"

"Real security can only be achieved by both a strong diplomatic effort as well as a strong effort to project your military strength," he said.

Panetta is expected to discuss the security situation on Israel's borders. Protests in neighboring Jordan have led to a change of government, while in Syria President Bashar al Assad has largely used violence to put down the demonstrations.

Iran and its nuclear program also will be on the agenda. Panetta said with much of the world opposed to Iran developing its nuclear capabilities, it would be best to work together to try to curb Tehran's ambitions rather than take unilateral action.

In a session officials said was added to the itinerary "relatively recently," the U.S. defense secretary will meet Palestinian President Mahmoud Abbas and Prime Minister Salam Fayyad to re-engage the Palestinians just days after opposing their bid for statehood at the United Nations.

Panetta said he would stress to both sides that it was important to begin negotiations on a settlement rather than setting conditions for talks or seeking other approaches to resolve the issue.

"The most important thing they can do is go to the negotiating table," he said. "You are not going to achieve Middle East peace by trying to slam-dunk it at the U.N. The only way you're going to achieve it is by negotiations."

Israel has agreed to participate in negotiations but the Palestinians have so far declined, saying Israel must first halt its expansion of settlements in occupied territory. Israel recently announced it would add 1,100 new homes to a settlement near Jerusalem.