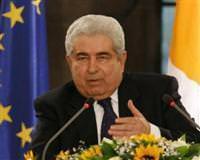 Greek Cypriot President Demetris Christofias was urged to resign or call an early election by a leading rival Tuesday after a report blamed him for a devastating munitions blast, Cyprus’ worst peacetime disaster.

An independent inquiry said Monday Christofias bore the most responsibility for an explosion in a cache of confiscated Iranian munitions at a naval base in July.

Christofias said that the claim, made by a lawyer he appointed, could not be substantiated.

"His options are a one-way street. Either he steps down, or seeks a renewal of his mandate," said Nicos Anastassiades, head of the right-wing Democratic Rally party and considered the main challenger in a presidential election due by February 2013.

The report said Christofias and his government kept the cargo of decaying munitions on the island instead of disposing of it, for fear of upsetting Syria.

Syria was the final destination of the shipment before it was intercepted by Cyprus under U.N. Security Council resolutions in early 2009. Authorities repeatedly ignored army officers' appeals saying the cargo was unstable.

Thirteen people, including the head of Cyprus's navy, died in the blast which also destroyed the island's largest power station.

In a defiant address to supporters Monday night, Christofias said: "The president of the republic categorically rejects that he has personal responsibility for the incident."

The July 11 blast culminated in the resignation of the junior coalition partner in his center-left government and knocked economic growth prospects down to zero.

His government lost its majority in parliament after coalition partners Diko quit in August. Although Cyprus has a presidential system, a parliament now dominated by the opposition will be called on to push forward economic reforms needed to prevent further downgrades by credit rating agencies.

Cyprus has been downgraded by all three main agencies this year because of fiscal slippage and the exposure of its banks to crisis-hit Greece.

Christofias has said he has no intention of resigning. His departure could be damaging, he said, while Cyprus is locked in dispute with Turkey over oil and gas exploration in the eastern Mediterranean, and while reunification talks on the ethnically split island are continuing.

As leader of the Greek Cypriots, Christofias is negotiating reunification with Turkish Cypriots. Any agreement must be approved in public referendums.

The United Nations, which is facilitating the peace talks, has steered clear of the blast row.