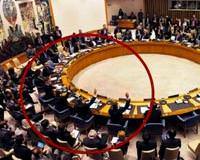 Turkey said on Wednesday it would impose sanctions on Syria despite the blocking of any U.N. measures against President Bashar al-Assad for his crackdown on dissent.

Russia and China handed Assad a diplomatic victory on Tuesday by vetoing a Western-backed U.N. resolution that could have led to U.N. sanctions on Damascus, but Turkish Prime Minister Tayyip Erdoğan promised action of his own.
"Naturally the veto...cannot prevent sanctions," Erdoğan said. "We will of necessity implement a package of sanctions."
Erdoğan, who is visiting South Africa, has said he will announce the package after he visits a Syrian refugee camp in Turkey in the next few days.
The double veto by Moscow and Beijing infuriated Western powers which have already imposed their own sanctions on Syria and were trying to pave the way for a U.N. embargo, and will reinforce Assad's hold on power -- at least in the short term.
"This is a sad day for the Syrian people. It's a sad day for the Security Council," France's Foreign Minister Alain Juppe said.
Germany also expressed disappointment. A government spokesman said the draft resolution would have been an important signal of support for many Syrians "who for months have been taking to the streets for political freedom."
Syria's state news agency SANA said Damascus welcomed the veto. "It restores hope for a balanced world ... after a long time of American and European domination which turned the Security Council's resolutions into a tool for punishing defenders of independence and liberation," SANA said.
The draft resolution received nine votes in favor and four abstentions. U.S. Ambassador Susan Rice said Washington was outraged and called for "tough targeted sanctions" on Damascus.
Russia's ambassador Vitaly Churkin said Moscow rejected the threat of sanctions on Syria and China's envoy Li Baodong said Beijing opposed "interference in (Syria's) internal affairs."
Russia has close ties with Assad's government, which has been a client for arms sales, and has a naval maintenance facility on Syria's Mediterranean coast.
Beijing and Moscow, which had voiced concern that the draft could pave the way for Libya-style military intervention, also want to limit Western influence in the Middle East, while the United States and Europe have long sought to loosen Syria's alliance with Iran.
Assad has used tanks and troops to crush an uprising which erupted in March, inspired by regional revolts which toppled three North African leaders this year.
The United Nations says 2,700 civilians have been killed. Damascus blames the violence on foreign-backed armed groups which it says have killed at least 700 security personnel.
Syria's economy is reeling from the impact of the unrest and U.S. and European sanctions on the small but key oil sector.
ASSAD "REINFORCED"
Assad faces a more united opposition after groups in exile came together in Istanbul on Sunday to call for his downfall, but the U.N. vote marks a setback to his opponents who had hoped for an escalation in international pressure on Damascus.
"We deeply regret the positions of Russia and China toward the resolution," said Omar Idlibi of the grassroots Local Coordination Committee in Beirut, adding he had "not lost hope in the international community."
Idlibi said the opposition was studying options including a general strike or civil disobedience campaign, but analysts said Assad did not look threatened in the immediate future.
"The mere fact that Assad can avoid international sanctions for the time being reinforces his position in the short term," said Ayham Kamel from the Eurasia thinktank.
"Assad is going to remain in power in the near term. I don't think there are signs of imminent collapse but Syria faces challenges across the country -- the economy, insecurity across the country, and a more organized opposition."
Syria banned most imports last month to try and conserve dwindling foreign currency reserves, but rescinded the measure on Tuesday after a spike in prices and disquiet among an influential merchant class that has been backing Assad.
Turkish sanctions could also have a major impact. But Turkish officials have made clear that any measures will target Assad's government and not the Syrian people.
For this reason Turkey has ruled out cutting off electricity sales or reducing the flow of water in the Euphrates river into Syria.
Bilateral trade between Turkey and Syria was worth $2.5 billion in 2010, and Turkish firms had investments of $260 million in Syria
One target of sanctions is likely to be Syria's state banking system, which could effectively block purchases of Syrian crude oil. Other possible measures could freeze Turkish cooperation in oil and gas projects involving state-run firms.