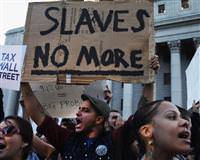 Thousands of anti-Wall Street demonstrators converged on New York's financial district on Wednesday, their ranks swelled by nurses, transit workers and other union members joining the protest over economic inequality and the power of U.S. financial institutions.

The Occupy Wall Street march, estimated at about 5,000 people, was mostly orderly and the largest so far, while smaller protests were staged in cities and on college campuses across the country.

A dozen people were arrested in New York, including one who was charged with assault on a police officer who was knocked from his scooter, according to police spokesman Paul Browne. Others who were arrested had tried to break through a police barricade, Browne said.

One police officer fired pepper spray as a "group of demonstrators charged a line of officers" standing at the intersection of Wall Street and Broadway, he said.

The protesters object to the Wall Street bailout in 2008, which they say left banks to enjoy huge profits while average Americans suffered under high unemployment and job insecurity with little help from the federal government.

The movement has surged in less than three weeks from a ragged group in downtown Manhattan to protesters of all ages demonstrating from Seattle to Tampa.

"I am a mother. I want a better world for my children," said Lisa Clapier, 46, a producer who lives in Venice, California, who joined protesters in Los Angeles.

In Seattle, where protesters had set up an encampment in a city park, about two dozen people were arrested for defying police orders to dismantle their tents.

"The cops are doing their job, and we're going to let them do their job. Then we'll come back and occupy the park again," said Michael Trimarco, 39, an unemployed carpenter.

Joining the march in New York were members of the American Federation of State County and Municipal Employees, Communications Workers of America, the Amalgamated Transit Union and National Nurses United.

"Our workers are excited about this movement. The country has been turned upside down, said United Federation of Teachers President Michael Mulgrew.

In San Francisco, a crowd of several hundred people marched around the financial district, chanting "They got bailed out, we got sold out" and "Join our ranks, stop the banks."

"This is the beginning of a movement," said Sidney Gillette, a nurse at Children's Hospital in Oakland.

Filmmaker Michael Moore was among the crowd in New York, shaking hands and posing for pictures.

"Everywhere you go in this country, you see the Occupy Wall Street movement," he said. "In the first days, people were putting it down, saying these are a bunch of hippies.

"But the average American who has lost health care, who is going to lose his job, whose home is in foreclosure can relate to this," he said.

Camped out in a park in downtown Manhattan, the New York protesters have been dismissed at times by Wall Street passersby or cast as naive students and mischief makers without realistic goals.

But, said office manager Hari Bala, who stopped to watch the protest as he left work, that perception may be changing.

There were signs that the protesters were catching the attention of Washington politicians. U.S. Representative Louise Slaughter, a New York Democrat, endorsed the movement.

"The gap between the haves and have nots continues to widen in the wake of the 2008 recession, precipitated by the banking industry. Yet we are told we cannot afford to raise taxes on millionaires and billionaires," she said in a statement. "I'm so proud to see the Occupy Wall Street movement standing up to this rampant corporate greed."

Students on college campuses added their voices. At the University of Massachusetts at Amherst, students walked out of their classrooms at noon, holding signs reading "Eat the Elite" and "We Can Do Better than Capitalism."

The protests began in New York on Sept 17 and have spread to Los Angeles, Baltimore, Philadelphia, Tampa, St. Louis and elsewhere. A protest in planned in Washington Thursday.

The protests have been largely peaceful, although last Saturday in New York, more than 700 people were arrested when demonstrators blocked traffic on the Brooklyn Bridge.

In Boston, where protesters have set up a makeshift camp in the financial district, Lisa Doherty, 56, said she comes to the encampment every day and plans to do so indefinitely.

She said she worked in mortgage loan processing but has been unemployed for more than three years.

"I have five children and seven grandchildren, and I want them to grow up in a better world with more equality and without corporations buying our politicians," she said.

In Chicago, office worker Tom McClurg, 52, said Wednesday was the first day he had joined protesters gathered in the financial district.

"I'm hoping it's going to raise awareness here of people's opposition to domination by financial interest of their elected representatives," he said, adding, "I think there are a million times more people not here who are sympathetic."