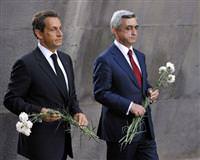 French President Nicolas Sarkozy, on a brief trip to the Caucasus, urged Turkey on Thursday to recognize the Armenian claims surrounding the events that transpired in 1915, threatening to pass a law in France that would make denying this a crime.

Visiting a memorial and museum in Yerevan, Armenia, with Armenian President Serzh Sarksyan, Sarkozy challenged Turkey -- which is seeking membership of the European Union -- to face up to its past.
"Turkey, which is a great country, would honour itself to revisit its history like other great countries in the world have done."
Armenia was the first stop on a two-day trip to the region by Sarkozy, who is keen to raise his profile on the international stage before an April presidential election. He visits Azerbaijan and Georgia on Friday.
France is opposed to Turkey's bid for EU membership and his comments on the sensitive subject are likely to be viewed as unwelcome meddling by Ankara.
Turkey denies the deaths in 1915 were solely of Armenians. It says both Christian Armenians and Muslim Turks died in large numbers as the Ottoman Empire collapsed.
Sarkozy suggested that the French parliament might consider a law making denial of the deaths of Armenians a crime, similar to the French law against Holocaust denial.