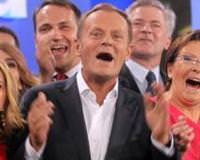 Donald Tusk will be the first Polish prime minister since the fall of communism more than two decades ago to rule for a second consecutive term after his centre-right Civic Platform trounced rivals in an election, cheering the markets.

With 64 percent of the votes counted, Tusk's pro-business party had won 37.5 percent of votes in Sunday's election, short of an absolute majority but far ahead of Jaroslaw Kaczynski's nationalist-conservative Law and Justice party on 30.6 percent.

Financial markets will welcome Tusk's victory, which points to four more years of relative political and economic stability in the European Union's largest eastern member state at a time of deepening crisis in the euro zone.

The Polish zloty edged up 0.1 percent in early Monday trade, while other regional currencies shed as much as 0.9 percent.

Although the partial results showed PO with a smaller share than the exit polls, the party and its preferred coalition partner, the Peasants' Party (PSL), would still together have enough seats to win a small majority in the Sejm lower house.

"From the point of view of the markets, this is very good news. Investors worried that we could see a coalition made up of three parties," said Ernest Pytlarczyk, chief economist at BRE Bank.

The leader of the rural-based PSL, Waldemar Pawlak, signalled he was ready to forge a new coalition with Tusk.

"The ruling party and coalition for the first time in Poland's post-communist history has been re-elected and that shows the consolidation of democracy in Poland," said Jacek Raciborski, a political scientist at Warsaw University.

"Only the low turnout is worrying," he added.

About one in two eligible voters took part in the election, in which a return to power by Kaczynski would have threatened relations with Germany and Russia and worried investors.

The PAP state news agency quoted a senior PO politician as saying Tusk and Pawlak might yet fall short of a majority and Civic Platform might also try to lure members of the Democratic Left Alliance (SLD) into a new coalition.

The SLD, heir to the once-mighty Communist Party, took a surprisingly poor 8.2 percent, according to the exit poll, while Pawlak's PSL secured 9.5 percent.

The final tally could show an even better result for Tusk's party, as the election commission usually includes larger cities, which tend to favour PO, towards the end of its count.

The outgoing coalition has presided over four years of strong economic growth, steering Poland smoothly through the 2008-09 global financial crisis without dipping into recession.

Its victory ends a string of defeats for ruling parties in elections in EU member states this year, including in Portugal, Latvia, Denmark and Ireland.

PO has pledged more cautious reforms aimed at reining in the public debt and budget deficit, expected to reach 53.8 percent and 5.6 percent respectively this year.

It also wants to continue a privatisation programme set to net 15 billion zlotys ($4 billion) for state coffers in 2011 and to pursue closer ties with Poland's EU partners.

Polish President Bronislaw Komorowski, a former Civic Platform lawmaker, is expected to ask Tusk to form a government but said he must first wait for the official election results, expected on Tuesday evening.

"I hope that it will be possible to reduce the time necessary for creating the government ... to a minimum," Komorowski said on Sunday evening.

The result is a personal triumph for Tusk, 54, a pragmatic liberal conservative from near Gdansk on Poland's Baltic coast, who was involved in the Solidarity movement that helped end decades of communist rule.

Tusk, whose country holds the EU presidency until the end of this year, favours closer integration with the rest of the bloc and says joining the euro remains a strategic goal for Poland despite the debt crisis in the euro zone.

He has good personal ties with German Chancellor Angela Merkel and has maintained a cautious rapprochement with Russia, despite strains over a plane crash there last year that killed then-President Lech Kaczynski, Jaroslaw Kaczynski's twin.

Jaroslaw Kaczynski's calls for a halt to privatisation, for higher taxes on the wealthy and for a more combative stance in dealings with the EU unsettled investors.

The main surprise of this election was the rise of a new liberal grouping, Palikot's Movement, which the exit poll showed winning 10.1 percent, much of it at the expense of the former communists.

Janusz Palikot, its founder, is a wealthy businessman and former PO lawmaker whose attacks on the powerful Roman Catholic Church and championing of causes such as gay rights and legalisation of soft drugs struck a chord among young voters.