State bans use of tanning beds by minors 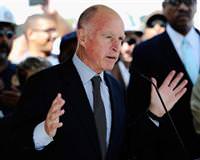 Minors in the state of California will no longer be allowed to use tanning beds after Governor Jerry Brown signed a bill on Sunday prohibiting anyone under the age of 18 from using ultraviolet tanning devices.

California is the first state in the nation to ban minors from using tanning beds, legislators said.

Previously, California had banned minors under the age of 14 from using tanning beds, but allowed those between 14 and 18 years of age to use tanning beds with parental consent.

The bill was part of a cluster of legislation signed on Sunday designed to "improve the health and well-being of Calfornians," according to a statement from the Governor's office.

"I praise Gov. Brown for his courage in taking this much-needed step to protect some of California's most vulnerable residents -- our kids -- from what the 'House of Medicine' has conclusively shown is lethally dangerous: ultraviolet-emitting radiation from tanning beds," the bill's sponsor, state Senator Ted Lieu, said in a statement.

"If everyone knew the true dangers of tanning beds, they'd be shocked. Skin cancer is a rising epidemic and the leading cause of cancer death for women between 25 and 29."

The law will go into effect on January 1, 2012, according to Lieu's office.