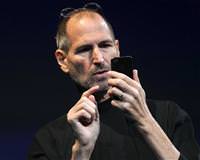 Apple Inc co-founder Steve Jobs died of respiratory arrest caused by a pancreatic tumor, according to the death certificate.

Jobs died last Wednesday at his home in Palo Alto, California, at about 3 p.m., according to the certificate, which lists "respiratory arrest" as the immediate cause of death with "metastatic pancreas neuroendocrine tumor" as the underlying condition that caused the respiratory problem.

No autopsy was performed on Jobs, who was listed as an entrepreneur in the high tech industry with "some college" education on the certificate released by the Santa Clara County Public Health Department.

The technology icon was laid to rest last Friday at a non-denominational cemetery in Palo Alto.

Jobs was surrounded by his wife and immediate family when he died.

He had struggled with health issues but said very little about his battle with cancer since an operation in 2004. When he stepped down in August, handing the CEO reins to long-time operations chief Tim Cook, Jobs said simply that he could no longer fulfill his duties as chief executive.