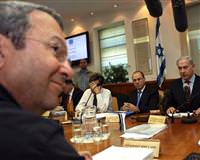 Israeli Defence Minister Ehud Barak apologised to Egypt for the deaths of at least five of its security personnel in cross-border shootings two months ago.

The incident, triggered by an Israeli response to gunmen who killed eight Israelis on a border road in August, caused the worst diplomatic row between the two countries since President Hosni Mubarak's overthrow by a popular uprising in February.

Barak's office said in a statement on Tuesday, citing a joint investigation with the Egyptian military, that he had decided "to apologise before Egypt on the deaths of all Egyptian police while carrying out their duties, as a result of gunfire by our (Israeli) forces."

A senior Egyptian intelligence official had earlier told Reuters high-level talks on the matter had been held in recent days in which Egypt had again "demanded an apology from the Israelis over the border incident."

Egypt was the first of two Arab countries to sign a peace treaty with the Jewish state, in 1979, followed by Jordan in 1994.

Israeli ties with Turkey have been strained over Israel's rejection so far of Ankara's demands for an apology for the killing last year of nine of its nationals on board a Gaza-bound aid flotilla that Israel said was in breach of its blockade of the Hamas-ruled territory.