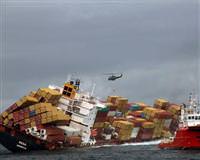 Oil tanks on a stricken container ship threatening to break in half off the New Zealand coast have survived a pounding by heavy seas, salvage experts said Thursday as the ship's owners apologized for the large clumps of oil washed up on beaches.

A second ship's officer appeared in court in connection with the running aground of the Liberian-flagged Rena 12 nautical miles off Tauranga on the east coast of New Zealand's North Island.

Large splits have opened up down the middle of the hull of the 236-meter (775-foot) vessel, which has been stuck for eight days on the reef and has lost up to 300 tonnes of heavy, thick, toxic fuel.

A salvage team was winched back on board the 47,230-tonne Rena and after an inspection reported the ship's rear tanks, holding around 1,000 tonnes of fuel, were intact. The ship was carrying 1,700 tonnes of fuel.

"The vessel again seems to have settled on the reef which is a good situation, so it's not getting that working that would be opening those cracks," salvage advisor Bruce Anderson told reporters.

Swells had eased to around one meter from five meters the day before, raising hopes that pumping will resume.

"This is not a simple process, there's been a considerable amount of damage on the vessel and they need to assess that first of all it's safe to operate and secondly that they can be operated," Anderson said.

Three tugs have been steadying the ship to keep it on the reef and stop the aft section breaking away and possibly sinking in water up to 90 meters deep.

The ship's owners, Greece-based Costamare Shipping Inc, said they were deeply sorry for the grounding and oil spill.

"For us, one drop of oil in the water is one drop too much. It is therefore a matter of great regret that a ship associated with us should be the cause of so much anguish," managing director Diamantis Manos said in a video statement.

He said the company was working with authorities to find the cause and liability for the clean up. Property damage would be settled in accordance with international conventions.

The ship's second officer, responsible for navigation at the time the Rena struck the reef, appeared in court on Thursday on a charge of "operating a vessel in a manner causing unnecessary danger or risk."

The 37-year-old Philippine national was remanded without plea on bail. The ship's captain appeared on the same charge and was also bailed Wednesday. The charge carries a maximum fine of NZ$10,000 ($7,800) or 12 months in prison.

More containers had fallen into heaving seas from the ship, which is listing at about 20 degrees. Eighty-eight of the 1,368 containers have been lost and authorities said one was carrying a hazardous substance which can explode on contact with water.

Police patrolled to stop any looting of containers, but beaches were covered with deerskins, foam insulation, timber and hamburger meat patties.

Tauranga, the country's biggest export port, said it would suspend operations between 0800 and 1700 GMT to remove debris from inside the harbor and check shipping channels.

Maritime NZ closed around 40 km (25 miles) of coast to cope with overwhelming numbers of people wanting to help in the clean-up.

Crews numbering about 500 people, including soldiers, have been gathering clumps of oil, some as large as dinner trays. But hundreds of residents, some angry at the time taken to start a clean up, have joined in, ignoring warnings to stay away.

"This is our place, these are our beaches, it's natural we want to save them, never mind bureaucrats," Jim Kohu told Reuters.

More than 50 tonnes of oil have been recovered from long, golden beaches, a magnet for surfers. However, each high tide is washing more on the beaches, which experts have said could continue for weeks.